In Age of Sigmar Orcs and Goblins have been renamed to Orruks and Grots. I think that this is partly because this sounds more in keeping with the mobish nature of the army, and partly because it makes searching for AoS stuff easier, You don’t have to wade through all that Tolkin stuff to find articles on your favourite game! – But that just my guess.

Orruks and Grots are the fun army in the Age of Sigmar game. They are erratic and unpredictable. They are colourful and specially the Orruks, loud!

Playing Orruks and Grots can be like playing two different armies at the same time. In fact you do not need to play both Orruks and Grots together. You could play a pure Orruk army or a purely Grot army. If you are playing a Grot only army be prepared to field a large number of models. This is because they die quickly and run away frequently! 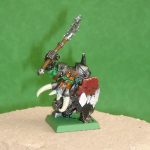 Orruks are big brutish creatures that thrive on destruction and mayhem. At first looks there does not seem to be room for tactics in this army, just charge, beat-up anyone that stands in the way, and then leave! However if you look a bit closer you will see that their twin Gods of Gorka and Morka also have their cunning tricky side too!

Goblin / Grots are smaller in size than their Orruk cousins, however what they lack in size they make up for in numbers. Grots are not brave by nature so you will find that their bravery score is low. To fix this you need to field units of 30 to 40 Grots. If you do this you will benefit from the ‘+1 bravery for each 10 models in a unit’ rule. A unit of 30 Grots will add 3 to your bravery. Look for other ways to improve your bravery score too. Inspiring Scenery and command abilities are good sources.

Grots have a number of artillery choices too. use these to take wounds of monsters and heroes before your infantry units get stuck in.

Grot magic tends to be a bit weaker than Orruk magic, but it is still very useful.

Hiding in the underworld of most realms you can find a particular breed of goblin called the Moonclan Grots. Hating the sunlight they lurk in cave systems and venture out in the dark. Even then they ware cloaks with big hoods just in case they get caught in the open at daybreak.  Skulking in the dark has made these Grots particularly tricky, fond of psychotropic mushrooms and a fondness for a biped fungus evolved creatures called squigs ( short for squiggly beasts ). 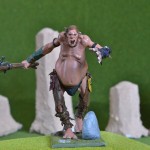 Other Troll and Giant units include: