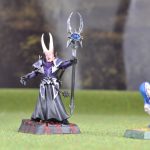 In this post we will have a look at the Chaos Sorcerer Lord and tactics you can use with the Sorcerer Lord in Age of Sigmar Games.

Magic is strong in the Age of Sigmar world, so fielding a wizard or two is highly recommended! Wizards are needed for their magic, but they are not good in hand to hand fighting. The best option is to make sure there are a unit or two of Chaos Warriors between your Sorcerer and the enemy.

Most spells have a 18″ range. This means that you will need to keep your sorcerer close to the action. Line of sight is usually needed too, so placing him up a tower or on a hill will be a good idea too.

The Daemonic Power spell has a casting value of 5, so it should fire off most of the time. To use it you should have a friendly unit within 18″. You could cast it on a enemy unit if you are playing a 3+ handed game and want to cause trouble indirectly!

When it is cast, the target unit get to re-roll 1’s for hit, wound and save rolls until your next hero phase.

Familiars are often imp like creatures that follow Sorcerers around. They are not much use by themselves, but do make spell casting easier for nearby Chaos Wizards.

How it works is if there are one or more familiars within 6″ of the Chaos Wizard in the hero phase then that wizard +1 to each magic roll you cast for that wizard. Most Chaos Sorcerers only cast one spell a turn, so this will usually only happen once a turn. However if your familiar is within 6″ of two different wizards then they both get +1 to their rolls.

Familiars help with unbinding spells too. If your familiar is within 6″ of a Chaos Wizard when you try to unbind a spell, you get +1 to that roll too! note that the familiar does not have to be within 18″ of the enemy sorcerer when you try to unbind a spell; nor do they need line of sight to your wizard. This means that you can keep your familiar a bit further back from the action and in relative safety.

Please be aware though that having multiple Familiars in the area does not improve the casting and unbinding rolls. You only get a single +1 no matter how many familiars are hanging around!

Just one more note about familiars, don’t bet on them in a fight. They hit on 6+, and wound on 5+. This means that they will wound once in 12 tries. This means once every other 6 round game, or you will have to have a unit of 12 to get a chance of 1 wound a turn, and these may be saved!

If you want to give your Sorcerer some speed and better hand to hand combat skills, place him on top of a monstrous creature!

The Chaos Sourcerer and Manticore are one model. You can not have your Chaos Sorcerer hopping on an off. Having both a Sorcerer and Monstrous creature together provides a big hitting combo.

Manticores can fly, and a good distance too. An unwounded Manticore can fly 12″. This means you can move quickly to support units, capture objectives,or exploit weaknesses in the enemy ranks.

Manticores are more powerful as a defensive unit than an aggressive one. This is because you can re-roll all hits against Monsters in your territory. You may need to agree what is your territory with some missions. Outside of your territory you only get to re-roll 1’s (which is still good to have ).