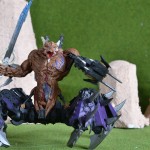 The AoS Soul Grinder is a model that was created for the Warhammer 40k Chaos Daemon army but has been imported in to the Warhammer 8th edition and Age of Sigmar games.

The Soul Grinder is quite a monster. It has 16 wounds, a bravery score of 10 and an arsenal of missile and melee weapons. It is fast too. Unwounded the Soul Grinder can move 12″ plus the usual D6 inch run if you want to too. On top of this the Soul Grinder gets a special rule with one of it’s melee weapons you get a 1 in 6 chance to cause 6 mortal wounds to a Hero or Monster that you are in close combat with.

You will want to be sure that fielding the Soul Grinder will not disrupt the balance of the game. It’s one thing to use a powerful model to win a battle, but if the games are too one sided you will find that no one will want to play with you!

So what is the best roll for the Soul Grinder? Well it looks like an army in one model. There is a lot to be said for using the Soul Grinder in a shock troop role, smashing in to, and hopefully through the enemy lines causing chaos and disruption as it goes. While the Soul Grinder is causing mayhem you can use your other units to focus on the objective and win the real game!

Chaos Wizards can summon a Soul Grinder as a spell in your Hero Phase. As you may expect, this is not easy. With a casting value of 10 the summoning spell should only work 1 in 6 tries. If you want to summon a Soul Grinder you need to have some bonuses on your side ( a familiar, near a magic alter is arcane scenery etc).

The Soul Grinder comes with a whole arsenal of weapons. There are two shooting weapons, the Harvester Cannon and the Phlegm (pronounced flem) Bombardment. There are also 3 melee weapons, Piston Legs, the Helforged Claw, and either a Warpmetal Blade or a Daemonbone Talon.

The Harvester Cannon has a16″ range. In Age of Sigmar games this plenty of rage to dominate most of the gaming table.Specially if you have your Soul Grinder towards the middle of the table. The Harvester Cannon has a variable number of attacks, depending on the number of wounds it has received. This starts at D6 attacks and diminishes down to 1 attack when the Soul Grinder is nearly dead!

The strength of the Harvester Cannon is it’s number of attacks as the hit and wound stats are average, although it does have a -1 rend.

First of, just in case you are wandering how to say phlegm, it sounds like flem.

The Phelegm Bombardment only has 1 attack a turn, but this is a 20″ ranged weapon. This means that you can fire it outside of the range of most magic spells, just. You will need to be careful of the distance measuring though. The extra 2″ does not give you a lot of leeway..

The to hit and wound stats are average again, but if you do wound you get -2 rend and cause 3 wounds.

When it comes to close combat you will find that you will get most of your attacks from it’s Piston Driven Legs. The Piston Legs have 6 attacks when the Soul Grinder is at full strength. This number of attacks diminishes as the Soul Grinder takes on wounds.

The Piston Driven Legs have a standard 4 to hit and 3 to wound. Attacks have a -1 rend when they do hit though.

The Hell Forged Claw is another close combat weapon that all Soul Grinders have. It s a single attack weapon with an average chance of hitting ( 4+ to hit, 3+ to wound). If you hit you will do D6 wounds at -2 rend. however the Hell Forged Claw comes with a special rule. If you hit a Hero or Monster you play a ‘stick, paper, stones’ type of guessing game with your opponent with dice. If you win you get to inflict 6 mortal wounds on that Hero or Monster. Note that if you kill that model any unused mortal wounds can not be applied to any other unit that the Soul Grinder is is combat with.

The Warp Metal Blade gives you 2 close combat attacks with the usual 4+, 3+ to hit and wound. If you do wound you get -2 rend and 3 wounds. This can be useful when taking on armoured opponents.

The Daemonbone Talon is a crab claw affair that some Soul Grinders have instead of a Warp Metal Blade. The Daemonbone Talon gives you 4 close combat attacks with a slightly better chance of hitting ( 3+ & 3+ to hit and wound). However successful wounds only have -1 rend and a random ( D3 ) damage.

The choice of taking a Warp Metal Blade or a Daemonbone Talon is usually take when you build the model and based on what you think looks best. However with a bit of simple modelling you could use mini magnets to allow you to swap the weapons before the start of the battle depending on which weapon you think will perform the best.