In these catacombs is the Star of Asher. With it’s power we will be able to bring many great victories to our cause! But beware! these catacombs are defended. What is more the tunnels will be too tight for us to keep in formation. It will be every man for himself! So now let adventure forward and create such acts of heroism that our story will be told for a thousand years!

Skirmish is an add-on rulebook released by Games Workshop. It is designed with Age of Sigmar at the small end. Instead of moving units of warriors around the table, each model is it’s own character. With each game in a campaign you can earn renown points. These points can be used to add models to your company, or used to improve your existing characters.

In a way the Skirmish rules fill in the gap from paying full role playing games like Dungeons and Dragons where each player plays a single character ( and you need a Dungeon Master to tell the story) and a full blown table top battle like Age of Sigmar where each player has a full army.

With Age of Sigmar Skirmish each player only has a few models, The minimum is three. There is no maximum number of models but you will rarely have more than 20 to start the game with.

One of the main differences between the Skirmish rules and a full game of Age of Sigmar is that each model is a separate unit. Each model can go his or her own way and does not have to be in coherency distance from another model. This affects the way that Battleshock Tests work and Spell like Summoning work. The core rules for Skirmish cover these points.

Where Skirmish really picks up is if you have a campaign of battles or adventures, specially if there is a storyline behind the campaign. One such campaign is included in the Skirmish rulebook.

Selecting the right mix of models to form your initial Warband is a core skill in Age of Sigmar Skirmish. You will only be fielding a few models compared to other full Age of Sigmar games. Some rules on what you can take are written in the rules. First off you heed a minimum of 3 models and at least one of those must be a Character. Another limitation is that all the models must come from the same grade alliance. Beyond these basic necessities each model has a points cost listed in the Skirmish rulebook. 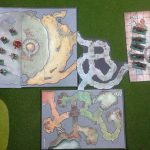 Aelf & Chaos skirmish for relics in the catacombs

Once you are familiar with the rules on making a Warband you need to think about the structure of the group. For example you could take 3 heroes, however you will probably find yourself out numbered in most games. Another option is to have one hero and a number of basic troops. Over all I would recommend taking one or two heroes and troops that have a good range of skills. Ones that can both shoot and join in combat and especially useful!

How to extend the Skirmish Rules

Another benefit of the Skirmish rules is that it is very easy to create your own missions and even whole campaigns. Even solo play missions are easy to create. All you need to do is add instructions for the none player models (denisons). For example a mission where there is a Monstrous Creature and the player needs to take it down!

As the Skirmish rules fit between classic role playing and table top wargaming, a good source of storylines and missions are the public domain role playing scenarios. Many of these only need a little adaptation to become excellent Skirmish missions.

As usual with table top wargames the play becomes more interesting if you have plenty of scenery on the table. The Skirmish rules also come with a purposely designed mysterious terrain table to use in Skirmish games, but you are free to create your own table instead.