How to use the Tyranid Carnifex to maximum efficiency in a Warhammer 40000 8th edition game!

“It was horrible! Over the hill crest this lumbering giant of a creature appeared. It had four massive talons and the thickest bone armour. I wanted to get a pot shot of it but the smaller creatures where reaching the lines and threatening to rip our heads off. Just then Captain Barrak appeared in the Leman Russ Invincible. Invincible fired it’s Lascannon at the hulking creature and missed, then the battle cannon roared. That hit knocking the creature to the ground but the creature just got up again. We thought it was dead when it let out this terrible scream. Not so. The scream was the creature bringing up a phlegm like ball of plasma which it hurled at us on the front line. I was lucky and the plasma ball hit further down the line. Burning though cloth and armour with equal ease the poor souls that it hit where burn alive. Sentencing a disruption in the line the hulking creature then raced for Invincible at a pace that defied gravity. Leaping in the air it through itself on to Invincible. At the same time the mighty talons ripped though the tanks armour like a hot knife through butter. Invincible’s armour gave a metallic screech as it twisted and contorted under the creatures massive strength. Then as a last cry of defiance invincible exploded killing the Captain and creature in one nightmare fireball.”

The Tyranid Carnifex is one of the Iconic models in the Tyranid army. You can have three per brood, but watch the points!.

The Tyranid Carnifex and the Hive Mind

The Carnifex is subject to Instinctive Behaviour. This is less if an issue than it was.

The Tyranid Carnifex Leadership is not particularly high at Ld6. The main use of Leadership is to see if any models run off in the moral phase. One tactic here is to place the Tyranid Carnifex in front of your Tyranid Hive Tyrant. This gives the Tyranid Hive Tyrant some solid cover, and it allows you have a solid core for your Tyranid army that you can surround with your smaller Tyranid creatures.

The Tyranid Carnifex comes with a few special rules. They are easy to handle, but worth knowing that they are there! 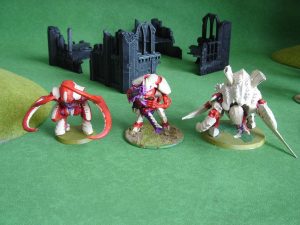 Different generations of Carnifex models side by side. See how she has grown!

You can have up to 3 Carnifex in a brood as one unit choice. Although Carnifex Brood models need to start near the other Carnifex of that brood they seem to get bored of each other quickly and can wander off in different directions in the first movement phase.

The reason you may want a brood of Carnifexes is to reduce the number of unit slots used in your Detachments. This only matters in really large games or ones where you are restricted to the number and types of Detachments available.

If a Carnifex gets to charge in to assault then it does a whole ball of damage! First as you charged in you should get to strike first. Second, you get to inflict a mortal wound on a 4+. Thirdly you get +1 to your hits that round so only a 3+ needed.

This special rule means that Close Combat only Carnifex are back in the running. This is specially true if you are Hive Fleet Kracken.

The Carnifex has a number of weapon choices that you can choose from. What weapon choices you take will depend on the opponent that you are facing. The three popular configurations ( in no particular order) are close combat specialists, heavy weapons platforms, or close support fire platforms with some close combat ability.

The default weapons on the Carnifex is two sets of Scything Talons. These are close combat weapons, so if you stay with the basic options you will need to make sure that your Carnifex will get in to close combat range on a regular basis, and early enough in the game to be worth the points.

The Scything talons cause 3 damage and can re-roll hit rolls of 1. With this weapon you will want to target models with more than one wound. Tanks are the traditional targets for Carnifexes, but characters make a good target (meal) too.

If you have two sets of scything talons you get an extra attack. This makes having two scything talons very popular. This is so popular that we have a special unit entry in the Tyranid Codex, the Screamer Killer!

The Crushing Claws upgrade gives you more bite in your close combat attacks. the downside is that they hit less often.  As this is a close combat upgrade, it’s value is determined by the number of times that you get in to close combat.

The Deathspitter is similar to the Deathspitter that the smaller Tyranid creatures get, however the Carnifex gets twin-linked Deathspitters. This is just as well as the Carnifex’s BS3 score means that you will only hit 50% of the time. The re-roll will mean that instead of expecting 1.5 hits per turn you can expect 2.25 hits ( ie about 2 per turn and 3 hits about every 4 turns you shoot).

If you take two sets of Deathspiters then this rate of hits will double, but you loose your close combat weapons.

The strength and AP of a Deathspitter is not over awesome either. Basically they are 18″ heavy bolters. The usual opinion is – don’t bother!

Adrenal Glands allows the Carnifex to move an extra inch when it advances or charges. This does not sound much, but these extra inches do add up. .

Note: that you can still only declare a charge 12″ away from your target even though, with a good dice roll, you can get a 13″ charge in.

Toxin Sacs allows you to have a 1 in 6 chance of causing one additional damage if you wound on a 6+ in the Fight Phase.  This means that shooting weapons do not benefit from this upgrade, so heavy weapon Carnifex can forget about it! As for close combat ‘Fexes then have a think about what targets you are planning on tackling. If you are taking on one or 2 wound targets, or even characters then an additional wound will be very little bonus. It’s only when you are expecting to take on a few Monstrous Creatures or Tanks that the upgrade may start to pay for it’s self. On this whole it’s not likely to pay for it’s self.

New in the 2017 Codex is a new breed of Carnifex – The Screamer Killer!

Gramps is back! When I say that the Screamer killer is a new unit, rally it is a throw back to the original metal Carnifex. The original Carnifex had 2 pairs of monstrous scything talons and had a screaming vomit shooting attack.

The Screamer killer has two forms of attack, the Monstrous Scything Talons and the Bio-plasmic Scream. This combination means that it makes a great close support creature.

Tyranid Thornbacks are a specialist Carnifex found at Forge World. At forge world they are called Stone Crusher Carnifex and come with Crusher Claws. Another option would be to create your own Thorneback with a bit of modelling.

Thornebacks are designed to be close combat troops, however you can upgrade then to have shooting weapons too. The value of upgrading is questionable. Shooting weapons are assault weapons so you can be used between assaults. In my mind though, if you want a multi-purpose Carnifex ( and these can be very effective) I would suggest going for a basic Carnifex with close combat and assault weapons.

The Stone Crusher Carnifex is a Forge World model and has rules for WH40k 8th edition printed in the Forge Worlds Imperial Armour Index: Xenos.

The Stonecrusher Carnifex is a close combat specialist. It can be upgraded to have Bio-plasma (12″ Assauld D3, S7). The Bio-plasma can be useful to soften up troop as you charge in or as a over watch weapon if some on charges you, otherwise you only need to focus on the charge and fight phase with this one!

As the Stonecrusher Carnifex is such a close combat specialist you will need to get it (her?) in to combat as soon as possible. With this in mind you may want to team the Stonecrusher with a Tyrannocyte to get it in to the thick of combat fast!

So you want a Carnifex HQ character? No problem! Here comes Old One Eye…