How Does Age of Sigmar Magic Work? 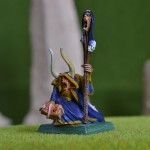