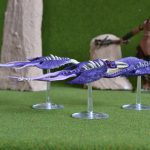 The Screamers of Tzeentch are the fast flanking units of the Tzeentch army. They are designed to swoop around the flanks and attack the weak spots in the enemy army.

Screamers of Tzeentch come in small units ( usually ). This means that you will need to pick your targets carefully. If you take on too large a unit then they will just walk over, or squash your Screamers.

The Screamers of Tzeentch Profile

The Screamer are fast. They can move around the table at 16″ a turn and can fly over obstacles. This is 3 times faster than most foot troops, so if you are in a tight spot you should be able to fly away.

Screamers have a Bravery score of 10. This should mean that they hang around during the battleshock phase. Having 3 wounds per model helps too. Just be careful of the 5+ save. Keep in cover when you can to increase the Screamers survivability.

The Screamers of Tzeentch Abilities

The Screamers of Tzeentch have a special rule ‘Slashing Fins’. This allows you to have extra attacks on a unit that the Screamers fly over during the movement phase. The trick here is to start and finish far enough away from danger if you end the turn too close to the enemy then you risk a counter attack. The Slashing Fin attacks can be used to take wounds off a target unit (Monster?) that you plan to assault in the assault phase.

If your Screamers of Tzeentch is within 9″ of a horror hero them the screamers are harder to hit. Note that any model from the unit of screamers needs to be in range, so if you create a Congo line of screamers then you can extend the range the screamers can reach.

If you have a Chaos Wizard on the table they can use one of their magic spells slots to summon a unit of Screamers. The summoning spell has a casting value of 6. This means that it will go off most of the time, but if you can improve you odds by being near a Chaos Familiar or Arcane Ruin, then you should.