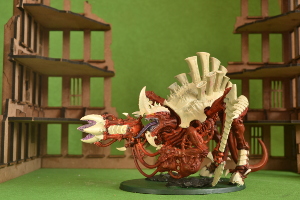 The Tyranid Tyrannofex is huge! And at 200 points, it will really bite in to your army list’s points!

The Tyranid Tyrannofex comes with the Stinger Salvo ‘free’. This is a A4 S5 weapon, however it has a 18″ range. The best use for the weapon is often as a deterrent against assaulting troops.

The Acid Spray is the default main weapon for the Tyranid Tyrannofex.  It is a S6 Torrent weapon so it can shoot a 12″.

If you have used a torrent weapon before what you do is find a target within 12″ and place the flamer over the target in any direction. However the thin end of the template must be closer to the Tyrannofex than the larger end. A bit of practice with this will help identify the different ways you can do this.

The Fleshborer Hive is the cheapest upgraded option and gives you an A20 (!) S4 18″ weapon. With the Tyrannofex BS4 you can expect half of these to hit. However 18″ is not a great range for a shooting weapon. Also the AP4 will mean that many opponents  will get saves. If you can not assault or wipe out your opponent then you can expect to be assaulted in the next turn. Fleshborer Hives do make an awesome over-watch weapon though.

The Rapture Cannon was created for the Tyrannofex and is the best weapon option available for it. Armed with the Rapture Cannon, the Tyrannofex makes an excellent anti-tank gun platform. The 48″ range means that it can keep some distance between its self and the enemy, while the A2 S1l0 punch is enough to peirce the toughest armour.

The Tyranid Tyrannofexs are not invulnerable though. Because they are creatures, they will be vulnerable to sniper fire, as Sniper wound on a 4+ regardless of toughness.

The Tyrannofex and the Hive Mind

For all it’s size, the Tyranid Tyrannofex is not a Synapse creature! Its Ld8 score will mean that the Tyrannofex will make most of it’s instinctive behaviour tests, but for the best results you will need to keep it within hive mind range.