The Dark Angel Space Marine chapter has a number of named characters that have special rules. Be careful of special rule character. Their point values will have been increase to cover these special rule, so if you take these characters and do not use the special rules, then you will be throwing your points away. 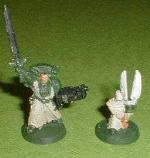 Where is Azrael’s Tactics? I hear you ask ( I don’t, but I can imagine it), well in the 2015 Dark Angel Codex Azrael has moved to the Dark Angel Lords of War section.

Belial is the master of the Deathwing, and as such his stats are nearly as good as Azrael’s ( 1 less wound ). He does have fewer special rules so the points cost is notably lower. This means that Belial can make a great substitution if you are needing a hard hitting character but you are needing to budget your points.

You use to have to have Belial in your army to play a Terminator army list, however on page 141 we now have a formation that allows you to have a full Terminator formation complete with the Deathwing Assault special rule.

Belial comes with the usual Space Marine Terminator armour and Storm Bolter. In addition to this Belial comes with a master crafted AP3 power sword, called the Sword Of Silence. This is a great weapon to slice through Space Marine and Chaos Marine power armour. It also is a Master Crafted weapon. This means that Belial gets to re-roll one missed close combat attack each assault phase ( both yours and you opponents).

The Sword of Silence is a great close combat weapon against Power Armour, but it will struggle against tanks, and have too few attackers to handle massed troops like Guardsmen, Smaller Tyranids and Orks. If you know that you are facing armies like this then the Storm Shield and Thunder Hammer weapon choice will be a better option against tanks, and the Lightning Claw option against horde armies.

Belial comes with Terminator armour. This gives him a good amount of protection from both close assault and ranged weapon fire. The Iron Halo that he comes with improves his invulnerable save down to 4+ too. However all this armour does not make him totally invulnerable. Enough anti-tank or psychic attacks will hack him down. This is why teaming Belial up with a Terminator Command Squad or attached to a regular Deathwing Terminator Squad is a good idea.

This special rule makes Belial a superb assassin. He can drop in on turn two to any point on the table, without scattering, with a squad of Terminators, Terminator Knights. All you have to work out is how to extract them again before the enemy can counter strike ( where is a Land Raider when you need one! ).

It’s no surprise that Belial gets the Deathwing Special Rule. After all he is the leader of the Dark Angel Deathwing.  Having this special rule does mean that he will be extra stubborn and extra useful against Chaos Space Marines.

Beilal gets the, Grim Resolve special rule. This is the special rule that gives the Dark Angels their legendary stubbornness. With this special rule you know that Belial will stay stuck in combat to the bitter end, even if you don’t want him to!

Grim Resolve also means that Belial will resolve overwatch shots at BS2. This means that you will hit units charging him 1 in 3 times ( 33% ). If he is with a unit that also has this special rule your opponents will think twice before assaulting you.

Sammael is the Master of the Ravenwing, the bike and land speeder arm of the Dark Angel army. Because of this, Sammael is one of the few character in the Warhammer 40k game that come with transport attached (instead of being an optional extra).

Sammael has two modes of transport he had choose from, A Land Speeder, or a Jet Bike. Yes that is correct, Sammael is the only Space Marine that can have a Eldar like Jet Bike.

On Sammael On Jetbike Corvex

The Dark Angels have a number of pre-heresy equipment. Sammael’s Jetbike Corvex is one of these relics.

Jetbikes have a number of special rules. The +1 toughness has been added to Sammael’s stat line already, so don’t try to get him even thougher! Jetbikes have a 12″ basic move that can hop over obstacles. They can also turbo-boost 12″ instead of shooting. That’s a massive 24″ move each turn.

If you do shoot then they are relentless. This mean that they fire as if you did not move, great for the Plasma Cannon on Corvex. Also on most jetbikes you can only fire one weapon per rider however Sammael’s special rules say that he can fire two weapons per turn. This means you can fire any combination of the bolt pistol, Storm Bolter, Plasma Cannon, or throw a grenade each turn.

Assaulting on Corvex gives you the Jetbikes hammer of wrath attacks, hatred for Chaos Marines, Sammael’s AP2 master crafted power sword, an Iron Halo for 4+ invulrenable save, and the hit and run special rule to get him out of combat if you need to.

Sammael on jetbike is an independent character. This is important because it allows Sammael to join, and hide in. Without this skill Sammael would be a sitting duck. The trick though is to join a squad that can keep up with him. There are no jetbike squads in the Dark Angel army, so top suggestions are bike squads, jet pack squads, or Landspeeder squads.

If you are looking to give Sammael a bit more punch, you can field Sammael in his souped up Landspeeder Sableclaw.

Sableclaw is a standard Landspeeder with twin linked Heavy Bolter and Twin linked Assault Cannons. As these fire with Sammael’s ballistic skill 5, you will be confident that most shots will strike home.

Sableclaw does not have the ‘Independent Character’ special rule so Sammael will be a single target. Because Sammael will make a tempting target get ready to use those jinks saves, Ravenwing cover save re-rolls, and Iron Halo 4+ invulvenrable saves (no re-rolls available for this).

> House Rule: In the past Sammael had been able to be joined by a squad of Landspeaders, so we have a house rule that Sammael in Sableclaw can join Landspeeder squadrons like a special type of Independent Character. Remember that you need your opponents ok for this at the beginning of the game to use this rule.

Librarians are much more useful since the 6th Edition of Warhammer 40000 than they have for several update of the rules ( 2nd edition really ). Because the Librarians are now much more of a games changer you may want to make sure you have one in your army.

The most powerful psyker in the Dark Angel army is Ezekiel, the Grand Master Librarian. Ezekiel come at quite a points cost though. This means that having a game plan for Ezekiel is important. If you do not know who you are facing, for example in a tournament, then you will need to plan several strategies so that you can pre-empt as many possibilities and have a pre-prepaid response.

Ezekiel gets a master crafted bolt pistol and a master crafted force sword. This would make you think that Ezekiel is designed to be a close combat character. Ezekiel has a BS and WS 5. This means that you should get most shots and attacks to hit.

Beware because Ezekiel does not have any invulrenable saves so you may want to team him up with a command squad or a Chaplain to take up any challenges.

Ezekiel’s other great strength is his psychic abilities.

Asmodai is the chief chaplain of the Dark Angel army. He was missing from the 2006 Dark Angel codex but makes a return in the 2013 Dark Angel Codex.

Asmodai is an Interrogator-Chaplin with a few additional rules at a add 30 points cost. As long as you remember to use the additional special rules, Asmodai works out as a good deal!

Asmodai gets one fixed warlord trait from the Dark Angel codex, ‘ The Hunt ‘. This means that you will want Asmodai to be present when you assault the enemy’s warlord’s unit.

The Company Master is the standard HQ choice for the Dark Angel Army.

The Company Master is comparable with the Generic Space Marine Captain, and costs the same points. The difference is that The Dark Angel Company Master has one less point of weapon skill, but is fearless, and gains something far more valuable, the ‘Rights of Battle’ special rule.

In the Warhammer 40k 6th edition rules the Psykers have become much more useful. Now Psykers get one ( Level 1 psykers ) or two ( Level 2 psykers ) powers from a selection. The Dark Angel Librarians get to choose between the Divination, Pyromancy, Telepathy, or Telekinesis lists. These psychic power lists can be found in the main Warhammer 40k rulebook. If you are new to the Warhammer 40k psychic powers, I would recommend getting use to one list, and expanding to the other lists over time.

One difference between the Dark Angel Techmarine and the Codex Space Marine Techmarine is that it appears in the HQ section instead of the Elite section. This is mainly because the Dark Angels do not have a ‘ Master of the Forge ‘ option. It should be noticed that there is not a Thundercannon option for the Dark Angel army either.

Does not use a HQ Slot

As noted in the introduction, the Dark Angel Techmarines do not use up a HQ slot even though they are elite troops. This means that you can have two HQ choices and extra Techmarines on top. You do have to have none-dedicated Vehicles in you army to have Techmarines. The rules are unclear as to if a Dreadnought counts as a vehicle. If it doesn’t I can not understand the rule that you can have one Techmarine for each vehicle in the Elite section as there are no other choices. This might have to be decided by house rules!

Note Just to add to the mix, no vehicles are dedicated any more as transport can be used for any friendly squad.

Servitors are helpers for the Techmarines. They come in two broad types. The first type have servo-arms that help Techmarines fix tanks and have powerfist close combat attacks. The second type are upgraded with heavy weapons. As you can have up to four servitors per Techmarine, this could be a hard hitting close combat unit, or a close support fire base. I do notice that the Plasma Cannons for the Sevitors are 5 pints more than the Devastator squads, so for best value keep to the Heavy-Bolter or Multi-Melta options.