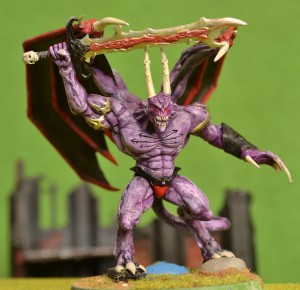 The Chaos Space Marine Army benefits from having a strong leader, and the Chaos army list has a number to choose from. Be careful here though, many of these HQ choices can cost a packet in points. You will want to make sure that you do no spend more that 25% of your points on HQ choices, otherwise you may find that you do not have enough points left for an army to back up your hero.

The Chaos Marine army has a number of special characters that you can choose from. Be careful of the points cost for these characters. One man alone will not win the game for you, specially when they can not claim objectives.

Abaddon The Despoiler is the most powerful of the Chaos Space Marine special characters, and has the highest points cost.

Abaddon is a one man army, but he costs more than the points you pay for a Chaos Land Raider. This means that for every turn that Abaddon is not doing something then you have a sizeable section of your army redundant. This in turn means that you will need to get Abaddon on to the gaming table as fast as possible. A popular way to do this is to use the Terminator teleport system that is built in to the Terminator armour. This will mean that Abaddon will start in reserves ( if reserves are allowed). However the delayed arrival is usually offset by the speed that Abaddon can get into fight.

Abaddon has some fearsome weapons. For starters the two close combat weapons give Abaddon 4 + D6 attacks at S5. The other one that allows you to re-roll any missed wound ( but not re-rolling missed hits) at S8, means that Abaddon will be wounding most characters and monstrous creatures on a 2+ ( with that re-roll). This will mean that he will be able to walk through most one on one close combats. Be careful that you are not out numbered. If there enough returned hits Abaddon will eventually succumb and fall.

Abaddon also has a twin linked bolter. This is not as good as the Storm Bolter of the Imperial Space Marine Terminator as it is still a single shot per turn rapid fire weapon, but it does allow Abaddon to re-roll missed hits.

First off Abaddon is wearing the super tough Terminator armour. Even if he did not have any other special rules, this would make him a tough nut to crack. However as well as the Terminator armour he has the mark of Nurgle as this adds 1 point of toughness to his stats, and because he has the mark of Tzeench he has a 4+ invulnerable save instead of the usual Terminator save, and if that is not enough Abaddon also has the eternal warrior special rule so he can ignore the instant death special rule too.

Abaddon has the Black Crusader Chaos Space Marine special rule. This gives you the preferred special rule for Space Marines. This will give you an extra advantage when fighting them in close combat or when shooting weapon.

Note: Abaddon has the marks of Khorne and Slaanesh too however the bonuses that these marks give Abaddon have been added to his stats already so don’t go thinking that you can add extra attacks and initiative to his skills! The good news is that you should find that what he has is plenty enough.

Also note that the +1 leadership for the ‘ Veterans of the long war’ rule has no effect as Abaddon already has L10.

Typhus is the named Chaos Lord for the Nurgle. Not only is he is warlord but he is a level 2 psyker too.

Typhus does not have any shooting weapons however as a psyker he may have some shooting options using his psychic powers.

To make up for the lack of shooting weapons Typhus has a Daemon Weapon ‘ Manreaper’. This is a S6 AP2 Force Weapon.

Typhus has a close combat special weapon ‘The Destroyer Hive’. This is a one shot weapon that works best when Typhus is in close combat with a number of models. Be careful though this weapon is as dangerous to your friends as it is to your enemies!

As a named character Typhus has a number of special rules. You will be well advised to get very familiar with all the extra rules and may be to have a 4×3 card with a reminder of the rules so you can review them quickly during the game.

Typhus has the mark of Nurgle so he gets the usual +1 toughness. Note that this is already added to Typhus stats so don’t go thinking that you can upgrade his stats to T6!

Typhus has Terminator armour. This gives you a great way to get Typhus in to the fight quickly. As Terminator armour comes with teleport built in, so if you pair him up with a Terminator squad and you have a hard hitting squad that will dole out some real pain.

If you don’t like the idea of teleporting your very expensive HQ unit in to the either, then you will need a Land Raider as a taxi to make sure that Typhus gets in to the fight.

Everyone loves a good Zombie! Ok not everyone, but I imagine that we will see Typhus fielded more often just so they can have a 35 model Zombie unit on the table!

Note that Zombies don’t have to be just units of walking dead. They make great units for holding objectives too, specially if they can hide in cover too.

Chaos Lords are the most powerful generic characters that you can choose for your Chaos army. The Chaos Lord will usually be the general for your army too, unless you have a named lord in your army too.

The Chaos Lord will usually have a mark of Chaos as these marks are very useful. For example most of the marks allow you to take one of the elite units as troop units. Note that the mark of Tzeentch does not bestow this benefit.

The Chaos Lord can take a number of weapon and wargear upgrades. Be careful here. There are a good number of options available. You will be advised to keep your focus on the role that you want the Chaos Lord to fill. If you don’t you could over spend points on options that you do not use, and these points could be better spent elsewhere in your army list.

With a basic points cost of 145 points the Daemon Prince is the most expensive generic HQ choice (ie. Not a named character). So what do you get for the points and is it worth it?

Well for starters you will need to think of the 145 points for the Daemon Prince as a starting point and not the final bill.  For starters you must take a mark of Chaos ( and only one), and each one has a points costs. On top of this you may want to add Power Armour and may be wings or other upgrades. So have a think about how you would use the Daemon Prince in a game and what upgrades you will need. My advice would be to keep the upgrades down to the minimum needed to do the job.

Chaos Daemon Prince as a Daemon

As the name suggests the Daemon Prince is a Daemon. This means that it gets all the Daemon special rules like a 5+ invulnerable save and cause fear. This 5+ inv save can become 4+ if you have the mark of Tzeentch.

Be aware that there are a number of special weapons in the 40k universe that have special Daemon special rules too.

Chaos Daemon and Marks of Chaos

The Chaos Daemon mus be upgraded with one of the four marks  of  chaos. You can only have one mark of chaos so choose carefully. Otherwise as all the Daemon Princes look the same regardless of the marks, so have a go with all of them and see which mark suits your playing style. Also as different marks of chaos will give you different advantages against different armies, so if you are tailor making an army list to fight a specific army you may want to take a specific mar of chaos.

The Chaos Space Marine Warpsmith is a new addition to the 2012 edition Codex: Space Marines.

Dark Apostle are the Chaos Space Marines version of the Chaplains and are often used in a similar fashion. This is usually in leading a close combat unit in to assaults as often as possible.

The Chaos Space Marine Dark Apostle gets the same 4+ invulnerable save that his Imperial Space Marine counterparts do. This means that you can be a bit more daring when you are getting your Dark Apostle in to combat. But do be careful as the unit that the Dark Apostle is with will not get this save!