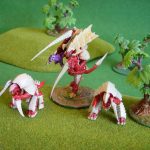 “Look at that big one in the middle! It’s ugly enough to be your sister!” Garock jeered to his lascannon loader. Drak just quiped back “Yer, but it proberbly smell better than yours does” connecting a new battery pack up Drak shotted “All sparked up, let em have it! ” This was the first time they had been up against Tyranids, the first time they had been up against anything since thier 3 week basic training. “Just shoot the big ones!” Thier veteran sargent instuctors words rang in thier ears. He has survived a full month of active service so he should know. “The 4005’th are struggling with those leaping gaunts, if they break through will need to pull back again.”

The Tyranid army is not for the faint hearted. Be bold! Be decisive! And make the most of your options.

These pages are written with the expectation that you own a copy of rules book, a copy of the 2014 Tyranid Codex, and have read them. Having played a few games will help too.

The Tyranid Codex gives the Tyranid army huge amounts of flexibility. You can design your force to suit the style of play that you enjoy most. The cost of this flexibility is the need to spend time and adapt your models to reflect the special abilities that model has.

As usual, these pages are written with the expectation that you have a copy of the main Warhammer 40k Rule Book and the Tyranid Codex. If you do not have these you will need to get them or have access to them if you have someone you can share with.

2014 Tyranid Codex and the 7th Edition of Warhammer 40k

The 6th edition of the Warhammer 40000 rules was not kind to the Tyranid army. The main cause is that the rules are swinging back to favour the shooty army, and Tyranids favour close combat. However the tactical objectives added to 7th edition missions mean that armies have to come out of their bunkers if they are going to get victory points.  This has helped to swing to balance between shootie armies and assault armies back to neutral.

The changes in the 2014 Tyranid Codex have been subtle but when you take an overview it can be seen that this codex placed more priority to troop units, particularly the Termagants and less to the monstrous creatures and special characters like the Doom, which does not appear in this codex at all. These gaps may be filled in with Dataslate publications from the Black Library over time.

Ok, now we will have a look at some broader tactics for Tyranids. For more detailed tactics please visit the sub-pages. I have detailed the tactics on a unit by unit basis on those pages. However in this section I will be looking at how the whole Tyranid army functions as one.

The Tyranid army list has been developed and extended over a number of Codex releases. These days you have a wide variety of unit choices in each of the HQ, Troop, Elite and Heavy Support sections. What you will not find is any tanks or fortifications. The Tyranid army is all about creature power, from the smallest ripper to the largest super monstrous bio-constructs.

One of the core Tyranid features / characteristics, is the ‘Hive Mind’. If there is one feature that you need to get a good with when you are running a Tyranid army, then the Hive Mind is this one!

Basically the Tyranid Leader creatures are needed to keep order in the ranks. They do this my creating a always on psychic bond (no psychic test need) to the lesser creatures. This bond usually reaches 12″ of the Have Mind creatures. If the lesser creatures start the movement phase beyond the 12″ Hive mind bubbles then they need to take a leadership test and if they fail the smaller creatures start following their own instinctive actions. There are ways to extend this 12″ bubble. Watch out for these options, they are very useful.

The problem with instinctive behaviour is that it is not predictable. Half the time the Tyranid will do something bad like run away, go to ground, or start eating each other.

I said earlier that the Hive Mind control usually extends 12″ in all directions ( 24″ diameter + the size of the creatures base ), however there are a couple of ways to extend this range. The first is that there is a Tyranid ‘Bio Artefact’ upgrade available to some of the HQ creature (one per army) called ‘The Norm Crown’. This gives on of your HQ creatures an additional 6″ range. The other option is that Tyranid Psykers can take the Tyranid Primeris power ‘Domination’. To use this you need to take a psychic test, but if you pass it gives that creature a 6″ to the Hive Mind range too. And yes you can have both together to get a 24″ range (48″ diameter), which will cover most of the table. A new addition to the Tyranid army at the end of 2014 is the Tyranid Sporocyst. This is a immobile Monstrous Creature come fortification that also extends  the Hive Mind reach of Hive Mind creatures nearby by a further 6″, and yes this is accumulative with other upgrades too.

Tyranids as a Swam / Assault Army

The Tyranid army is probably the most assault specialised army in the game. Assault armies are devastating close up, but generally to not have much in the way of ranged weapons. This means that you will have to run the enemy’s guns until you get in to close combat.

There are several ways to do this. One is that you have so many troops that your opponent just cannot shoot them all, another is that you use sneaky tactics like infiltration and deep strike, to start closer.

Always try to use the cover available to minimize your casualties.

There are 2 popular choices when it comes to swarm units. There are the Termagants and Hormagaunts. The Termagants come in at 4points each basic. This means that you can get a lot of ‘Gaunts for 1500 to 2000 points. The thing is that each Termagant or Hormagaunt do not pack much punch on their own. This means that you will need to field them in large broods. Broods of 20 to 30 work best. This allows the broods to soak up quite a bit of damage and still be affective.

The main problems that you will have with large swarms like this is that they will be vulnerable to barrage weapons. Flamers can make a mess of then too. The other issue is that is difficult to move large units between cover without leaving some of the unit out in the open.

Tyranids as a Deep strike Army

The Tyranids have more deep strike capabilities than most armies. This comes in several forms, but the effect is the same. Deep Strike comes in the form of Deep striking from winged creatures, or tunnelling from tunnelling creatures!

If you are playing a deep strike army you will want a Tyranid Hive Tyrant on the table as fast as possible. This is because the Tyranid Hive Tyrant has an upgrade that has a special rule that meant that you should get 66% of your reserves on during the second turn instead of the usual 50%.

Tyranids as a Shooty Army 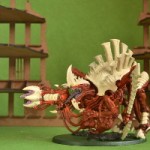 Tyranids are known for being a close assault army. The game tactics are usually to get the army in to close combat as soon as possible with the fewest casualties as possible, and them just feast on the opposition. The 6th Edition Warhammer 40k rules favoured the armies with ranged weapons. The 7th edition rules came with missions that favoured more rounded armies. Can the Tyranids adapt? Let’s have a look!

The Tyranids have 3 broad types of shooty weapons available:

Most of the weapons are medium 12″ to 18″ range, so you will need to get fairly close to get your shots in. If you are playing this game then the trick is to get close enough to get your shots in, but far enough out so that you do not loose the charge initiative. One way to do this is to pick off the smaller squads on the outskirts of the enemies forces, and unpick his formations.

Even if you are looking to field a shooty Tyranid army the speed and cover will still be your best friends.

Tyranids as a Monstrous Creature Army

This is a classic formation for Tyranid players that like to see large numbers of hulking beasts marching across the table smashing up everything before them. This style of army is often called a ‘Nidzilla’ army.

The trick with the Nidzilla monstrous creature army is to get monstrous creatures in to your troop choices, or minimize the troop unit points to allow you to spend more points on your HQ and Heavy Support options.