In this section we will have a look at the AoS Chaos Mortals in Age of Sigmar and Chaos Tactics. As usual you will need a copy of the rules and access to the units warscrolls to make the best use of these pages.

Warriors of Chaos, Monsters of Chaos, Warherd units, Dragon Ogors, and similar units make up for forces of chaos. It is quite reasonable to mix and match these units it the same army.

As with most armies there are a number of organizations available if you purchase the extra battletombs. These include extra abilities and special rules if you field the forces listed in the organization. If you have purchased a battletombe with a organisation that fits models you have,then you will find that fielding that organisation as part of your force will help. 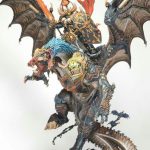 If you are looking for Chaos Warriors, then you need to look here in the Slaves to Darkness list!

Chais Slaves to Darkness units are usually neutral when it comes to being followers of one of the four Chaos Gods. Frequently though the unit special rules will allow you to choose to follow a specific God. This is useful if you want to have a themed army or use that Gods special rules.

Khorne is the most popular of the four chaos gods so there are a whole section of units that are Khorne specific. These are the Khorne Bloodbound.

There are more than just corrupted humans in the forces of chaos. In many armies you will find monsters of nightmares too!