Duardin are dwarfs, squat but sturdy. Many are miners, some are engineers, They are slower than most armies, but they can take damage and then dish it out themselves. In this section we will have a look at the Duardin and Duardin Tactics.

Duardin are slow but tough. This means that if you need to capture objectives, don’t hesitate, run for the objective from your first turn. This may mean that you may reach the objective before the end of the battle and be the target for war machines, archers and all. Don’t be too bothered about this as the Duardin’s toughness should allow you to shrug this damage off.

Duardin have a major advantage over most AoS armies and that they have easy access to hand guns and powerful war machines. These ranged weapons mean that you can form a defensive line and wait for the opposition to come to you, pelting them with lead, stone, and crossbow bolts as they approach.

The Age of Sigmar Duardin follow the Warhammer Fantasy Battles Dwalf story line in that Duardin ( and the Dwarfs before them ) have no wizards. What they have are runes that ward off magical effects 1 in 3 times. I highly recommend having as many units carry rune banners as you can. The more wizards you are facing the better.

Duardin can also have a Rune Lord in thier army. Rune Lords can not cast spells like wizards, but can dispell magic like a wizard. See the Duardin Rune Lord section for more details. 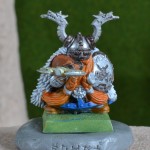 Warden Kings are the heroes and the natural leaders of the Duardin army.

The Warden King carries a Rune Weapon. Armed with the Rune Weapon the Warden King makes a powerful close assault character, but not a super hero. This means that your Warden King will work better if he has a bodyguard of Duardin warriors around him.

The Warden Kings 4+ save is good but not exceptional. His armour does nothing to stop mortal wounds either. As the Warden King only has 5 wounds you may want to keep him away from units that cause mortal wounds.

Regular wounds are a much easier to deal with than mortal wounds, The Warden King’s Ancestor Shield allows you to re-roll failed saves. This should allow him to save twice as many saves than usual.

The Oath Stone rule is a double edge sword. If you use it then your Warden King must stay still. This is great if you are defending a position, but can be a problem if the battle is fluid and moving around the table.

The model pictured in the Battle Scroll is standing on an Oath Stone. This can be confusing if you are using this special rule in some turns and not in others. I suggest creating a Oath Stone from a 30mm base. This means that you can place the Warden King on the Stone when you are using this special rule and remove the stone when you are not using it.

If you the Warden King as your hero then you choose to use his special command ability instead of the standard one.

Using the Ancestral Grudge command ability to can select a unit to add 1 to wound rolls. As this effects the whole unit it makes sense go pick a unit that will have a lot attacks that round. This could be both shooting and close combat attacks, so a unit that will do both in a turn will get double benefit ( miners throwing blasting charges before charging in for the assault ).

The Duardin army on the whole is quite slow. The main way to beat this is to get the enemy to come to you. The second option is to pop up behind the enemy lines and attack weak spots. The Miners allow you to pop up during any of your turns and just about anywhere on the battle table.

Duardin Miners are armed with pickaxes. These have a nice -1 rend, but other than that they are fairly basic. Where you can add a punch to your miners if you add a Mining Cart. With a mining cart all the miners get a 6″ ranged attack too. These Blasting Charges hit as usual but get -2 rend. This means that they can be useful as close support troops. For example if you have a row of Duardin Warriors and a unit of Miners just behind the warriors, the Miners can throw blasting charges in to an assault during the shooting phase. Just remember to leave a small gap between each of the Warriors so that the Miners can see their target.

“Present, Aim, Fire!” Bormore shouted to his musketeers. Another clean volley ripped though the approaching daemon horde. Some where turning tail (or tails he thought) and running. “Load” he shouted, one more volley should do the trick, “Present, Aim, Fire!” “There they go lads!” A cheer went up from the ranks. “Don’t drop your guard yet, there’s more to come!”

Thunderers are often the core of the Duardin army. Duardin are not fast so being able to knock out the enemy from a distance is an advantage. Thunderers can often be seen working in conjunction with Cannons.

The main reason to take a unit of Thunderers is for their main weapon, the Duardin Handgun. This is a musket type weapon with 16″ range, regular ( 4+,3+) chance of hitting, and a very useful -1 rend.

So where does this leave your tactics. Well I recommend getting your Thunderers somewhere that your enemy wants and form a gun line. When your opponents come for you shoot, and shoot again. Once the opposition has been thinned out enough have your Warriors close in and finish them off.

Thunderers work better in number and not in close combat. If there are 20+ Thunderers in the unit in the shooting round and more than 3″ from any enemy unit (so out of melee  range), then the Thunderers get +1 to hit. This means the chance of wounding drops from 33.33% to 44.44%!

Quarrellers have all the same qualities that the Thunderers have with exception to the weapons they use. The Duardin Crossbows have 4″ longer range than the Thunderer Handguns, but they loose the -1 rend and 4+ to wound instead of 3+.

If there are 20+ Quarrellers in the unit at the start of the shooting phase and more than a 3″ gap between them and any enemy unit (so not in close combat), then the Quarrellers get to shoot twice this means that the chance to wound goes down from 25% per model to 50%, or one wound for 2 models! (before wounds).

Are Runic Icon Bearers Worth It?

Oh yes! If you have a Runic Banner in your unit of Thunderers or Quarrellers then they can ignore spells 2 in 6 (33.33%) of the time.

The Duardin Dwarfs are famous for their cannons, and rightly so! The Duardin cannons can be devastating to monstrous creatures and large units alike.

The cannons can fire quite a way with a 32″ range. This means that you do not need to get close to the hand to hand action at all. In fact keeping to the rear is the usual best advice. You will need a good line of sight though, so placing your cannon on a hill or castle wall is a good idea too!

You will need crew to work the cannon. Three come with the cannon to start with. Keep them alive as long as possible! The more shots you can fire ( to a max of 2) and the faster you can move if danger threatens the cannon. The cannon it’s self acts as cover for the crew if they are nearby. This will add 1 to their saves, which is handy!

What? you want even more damage? Well if you target units with 10+ models then you can re-roll the damage dice roll. This should shift your damage roll from a 3.5 average to a 4 or 5 average. That should be enough to thin out the hordes!

Get me and Engineer!

There are 2 units listed as Engineers, the Ironweld Arsenal  Human Gun Master and the Ironweld  Duardin Cogsmith. if you have either of these models within an inch of your cannon then you can re-roll failed to hit rolls for that cannon. This means that the chances of wounding go from 41.66% per cannon ball to 62.5% or 125% chance ( yes more that a 1 in 1 chance )with a full complement!  Now if you have a battery of 2 or 3 cannons and place your Engineer in the middle of them, you will really have a nasty contingent!