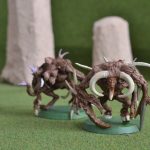 Chaos Spawn where humans that have been so warped by the forces that thwy are more animal than human. This warping also leads to the destruction of rational thought. This means that a couple of key abilities (movement and number of attacks), are random, and as you may have read elsewhere, I see randomness as the enemy of good tactics.

You can get Chaos Spawn in two different ways. The first is to have the Chaos Spawn as part of the starting army list as usual. The second is if a model (friend or foe) is warped bymagic are mishap and changed in to a Chaos Spawn.

Chaos Spawn are a bit of a wild card with random movement distance and number of attacks. If tou have some good rolls then they can cause a lot.of damage, however with a coupe of poor rolls your plans will fall apart!

The randomness that cause you so much hartache also is the Chaos Spawns strength. This is because although you don’t know quite what the Chaos Spawn will do, neither will your opponant! The difference is that you are the controling player so you can make best use of whatever the roll is.

So here is the key. The Chaos Sparn is a disruptor rather than a game winner in it’s own right. Use the Chaos Spawn to keep your enemy gussing and keep them havingto guard thier flanks and rear. It can really slow down  an army if you have to cover many different possible counter attacks.

With the Chaos Spawns (eratic) speed you may be able to flank, or break through the enemys lines and threten softer units at the back.

Chaos Spawn get 2D6 attacks per turn. That averages out at 7 attacks per combat round. That works out at 1.75 wounds a round. However the Chaos Spawn has another trick up it’s sleave. If you roll a double (which will happen 1 in 6 rolls)  then you wound on a 3+ which nudges the average to 1.86 wounds a round before save rolls. The thing is is that the range of possible rolls is a much wider than many units, so use with care.