Skaven are Chaos warped rat creatures that mainly live in the underworld of the Age of Sigmar realms.In this section we will have a look at the 4 main Skaven clans and what Skaven Tactics are available in Age of Sigmar games.

Skaven are rat creatures and follow some characteristics that are associated with rodents,specifically they work better in large numbers, and they prefer to run away to fight another day.

Backing up the troops the Skavens have a number of artillary and special units. Many of these have specific functions. Add these units to your army with care.

If you wish to start a Skaven army, start with a good number of troop units. Get use to there strenghts and weaknesses and ghen add in special units as you develop your play style. At the time of writing, Games Workshop have a ‘Clan Pestilance’ starter box set out. This gives a good value for money way of starting a Skaven army, and while stocks last  you can get even  better value for money by buying the Skaven Clan Pestilance box set from Wayland Games

There are countless different clans and subcultures in the Skaven high Archy, however there are 5 clans that dominate Skanen culture. The main clans are Clan Moulder, Clan Pestilens, Clan Eshin, Clan Skryre, Clan Eshin. In gaming terms, have a read through the back stories for each of the clans and pick the one than closest matches your favourite battle style and focus on learning that clan’s style and tactics first, and then, if you wish, expand to other clans tactics.

The Skaven Master Clan are the leaders of the Skaven race. The Master includes the vermin Lords and the Vermin King Lord Skreech, and the famous Screaming Bell.

Clan Skryre are the Techno-Wizards of the Skaven race, and by wizards I do mean magic users!

You may want to add Clan Moulder units to your army if you need a swarm of smaller rates creatures or some heavy mussel like Rat Ogors. 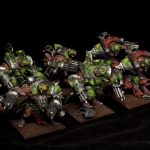 Clan Verminus place numbers above science and magic. You would add Clan Verminus units to your army if you need large blocks of Skaven. This is a good idea for the core elements of your army.

TThe Skaven Clan Eshin are the sneaky assassin creed of the Skaven race. Even then, who is the big dood at the front. Doesn’t he know that being 20 foot high is not very stealthy!

Skaven Clan Pestilence is the closest to Nurgle that the Skaven have.