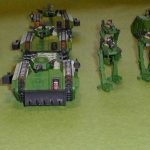 The Imperial Guard, or Astra Militarum is the front line of humanities desperate battle to survive in a very hostile universe. Oh yes the Space Marines think that they are the heroes and saviours of human kind, but they are few in number in relation to the vastness of space. The true saviours are the Astra Militarum, the Imperial Guard, the vast numbers of GI Joes putting boots on the ground, eating dirt, and paying the price in blood.

In this section we will be looking at tactics for using the Imperial Guard armies in the Warhammer 40000 8th edition game. To understand these tactics you will need the basic rules and a copy (or regular access to) the Index: Imperium 2 rules

Playing Imperial Guard armies in Warhammer 40k can be great! You get loads of troops and some of the biggest guns in the game. You are never short of number when playing this army. The skill comes in when it comes time to co-ordinate all these units to achieve your objectives. It’s all to easy to just sit back behind you barricades blasting away. However the more advanced WH40k mission involve capturing strategic locations and tasks. If you are not careful you will get out manoeuvred allowing the enemy to win the points even as he looses units. The most effective Guard armies have a solid back line with units that can capture objectives with supporting cover fire.

The Imperial Guard only has one published ability, and another that is less obvious!

The Imperial Guard armies have a common special ability called ‘Voice Of Command’. this represents the structured nature of the army and how the men look to officers for direction. Most HQ units will have the ‘Voice of Command’ ability listed on their data sheet. If they do then they can issue a special order to a unit nearby. Each HQ unit with this ability can issue one command, so if you have several HQ units you will use this ability several time a turn. There are no costs to using this ability, so make sure that you make the most of it!

If you are using the advanced rules you will need to form your army in detachments. The Imperial Guard army are no different to any other army in this respect. However because Guards are cheep in points you will find that it is easier  to create larger detachments that gain extra Command Points, or several smaller detachments that has the same effect. This means that you should be able to call on more Command Points than opponents that play elite armies ( Space Marines & all ).

Get familiar with the basic Command Point Stratagems and and additional Mission basted Stratagems. Your mastery of these additional skills will be a major bonus in your games. 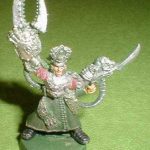 The Imperial Guard only has two options for HQ units. Those are the Company Commander, for your general foot slogging officer, and the Tank Commander that is more useful leading an armoured detachment.

Tank Commander: If you are fielding a company of tanks you will want to take a tank commander instead of a Company Commander. This is because the ability that the Tank Commander gets instead of the regular Voice of Command is designed to be better for tank platoons.

Lord Commissar: Did I say there where just two HQ unit options? well there is a third option hiding later in the pages of the Index: Imperium 2 ( page 46 ), and that is the Lord Commissar. Commissars are a double edged sword. They do add order to nearby units, but if they run then the Commissar will start shooting deserters. So which closes combat unit with low leadership scores, and enough models so that you can afford to loose one or two does this scream to you? – – Conscripts – -! Yes the best unit to team your Commissars with are conscript units, and then plough the commissar and conscripts in to your enemy troop units.

The Elite section of the Imperial Guard where you find the specialist units.It is also where you find the greatest concentration of special weapons. Beware though, elite units cost more points so if you take too many you will not have enough points for the many infantry units you will need.

When you need boots on the ground, it is the Troop units that you need to choose from.

When you need some punch, get some Heavy Support units.

The imperial Guard have access to probably the largest selection of super heavy tanks. Each super heavy vehicle costs 25 to 31 power points. This means that they are virtually armies in their own rights!

Lord of war units include: