These pages are written with the expectation that you have a copy of the Warhammer 40000 rules and a copy of the Index: Xenos 2 book that has all the rules and points values for playing a Genestealer Cult army.

What are the Genestealer Cults?

Genestealer Cults are the vanguard army for the Tyranids. Purestrain Genestealers hide on abandoned space hulks, star-ship wreckage floating through the space lanes that lie between the star systems. With luck these hulks will be boarded by salvage merchants and raiders looking for valuable ancient tech that these hulks often hide. Once boarded the Genestealers will infect the raiders with their DNA. The side effect of this is that the hosts become blindly devoted to their Genestealer parasites. The Raiders then take the Genestealers to a suitable planet, smuggling them past customs and hiding in the depths of society.

As soon as a Genestealer brood find a new home they begin to infect more and more of the poor and unwashed with their parasitic DNA. However that is not the most insidious part of it. As the infected humans breed and reproduce they create 2nd generation hybrid human/Genestealers (Acolyte Hybrids). These Acolytes often have latent psychic powers. The hybrids use their psychic powers to beguile the humans around them to accept these hybrids as their leaders. The most senior Acolyte becomes the Iconward.

All this infecting and breeding has one purpose. When there are enough infected mind controlled humans, the Genestealer Cults rise up and cause chaos and mayhem around the planet. At the same time the Genestealers subconsciously send a beacon to the Tyranid Hive Mind that this planet is ripe for harvesting. 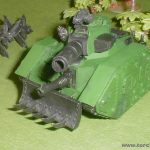 The Genestealer Cults thrive in the sewers and dark underworld of society. Using their knowledge of the tunnels and passages that exist below they can pop up in the middle of the battlefield part way through the game. Be aware that even the Cultists can get lost in the labyrinth of passages, so this somewhat random in it’s effectiveness. However this ability is useful enough to warrant becoming very familiar with how it works!

This is a way of giving your Genestealer Cult Characters extra wounds, at the expense of their near by underlings. If your Character has a bodyguard of Infantry close by, and the Character takes a wound, then on a roll of 4+ one model is slain. Note that you do not get a save for this model, and it looses all it’s wounds, if it had more than one. Also note that this works in the shooting, combat, psychic phase, or any other time that the Character may loose a wound.

The best way to use the Unquestioning Loyalty ability is to assign a unit of cheep Neophytes to your characters. These can be used to absorb some wounds and allow your characters to keep doing what they are good at.

There are three psychic powers listed in the Broodmind Psychic power list. All three of them are very usable. If successfully manifested, Mass Hypnosis stops a unit over watching which is very useful for an assault focused army, Mind Control allows you to get your opponents biggest and baddest units against him (great anti-cheese device), and Might From Beyond just beefs up a unit in the fight phase. This could be the psyker themselves, specially in the case of the Patriarch.

One of the main features of the Genestealer Cult arm is that many units can pop up from the subterranean sewers and passages. It is highly recommended that you get familiar with this ability and how to use it.

In matched play games half of your army needs to be set up at the start of the game. This means that in most cases you will not be able to place all your units in reserve as ambush units. As you build your army list think about which units will be in ambush and which will start in your deployment zone. You will want to arm you units differently depending on the role you want them to play.  Ambush units will need to be better equipped for close combat and the other units will need to have more fire power.

When units arrive using the Cult Ambush rule they arrive at the end of the movement phase either in turn one,two,three, or four. Any units that have not arrived on turn four are lost as casualties. Most players bring their units in on turn one, but you may have a sneaky reason for bringing then in later.

When you elect to bring a unit in you need to roll a D6 and compare the result to the Cult Ambush table. Basically the hire the roll the closer you can set your units to enemy units. On a 5 or 6 you can usually assault on the turn you arrive. On a roll of 4 there is a 50/50 change of assaulting. You do not have to decide where you place your units until the result has been decided. It may be worth using command points to re-roll bad results.

As there is a fair chance of assaulting on arrival you will want to target enemy capital units ( high value units that you can take down in one assault).

With the Genestealer Cult army list you get a choice of four HQ unit choices. There are no names special characters, but this is fine. The four available options are a good fit for the army and very usable.

Known as a Brood Lord in the Tyranid Army, the Patriarch is an over grown Genestealer. The Patriarch is a close combat specialist. This does come at the expense of shooting abilities. He (she?) has no ranged weapons other than it’s psychic ability. This makes tactics for the Patriarch easy. Get in to assault as soon as possible and as often as possible!

Get Familiar With Your Familiars

Genestealer Patriarchs can be accompanied by little creatures called Familiars for a few extra points or one Power Point. These are well worth having. First off, one per battle, they allow the Patriarch to manifest two psychic powers in the psychic phase, and secondly they effectively give the Patriarch two extra Toughness 5 ( T3 if the Patriarch dies) wounds. All very useful! Note that the Familiars only have a 6+ save and no invulnerable saves. This means that you will want to assign wounds that could not be saved to the Familiars, for example Mortal Wounds. Knowing which other wounds to assign to the Familiars, and which to have the Patriarch attempt to save is a skill that you will need to learn. 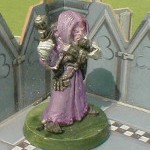 Where the Patriarch was the first Genestealer that made planet fall, the Magus is the product of several generations of breeding with the local population. With each generation the most psychically gifted offspring where mated to create an ever more powerful psyker. In previous codex releases the Magus has had formidable psychic powers. In the Index: Xenos 2 this has been toned down for better game balance.

Genestealer Magus’s can take Familiars in the same way Patriarchs can. Note that Magus Familiars are Toughness 3. However all the other benefits are there for the Magus too. This means that they are well worth taking if you have the points / power point spare.

The Cult Primus is a decent close combat fighter. Armed with poison weapons the Primus is defiantly better at taking on none vehicles. He will need a bodyguard though. Team your Primus up with a unit or two of Acolytes or cheaper Neophytes to absorb some wounds as your Primus closes in.

The forth HQ unit choice is the Acolyte Iconward. Acolytes are 2nd generation Genestealer hybrids. The icon ward does have some nice Abilities but on the whole the Iconward in not a choice HQ unit. Think about taking a Primus or Magus instead.

One reason for choosing the Acolyte Iconward as your HQ is if you are creating a themed army list based on a fledgling Genestealer Cult.