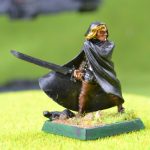 As the Daemon Prince swooped down on the Aelf Spearmen. Raising his mighty axe the Daemon Prince was surprised by a black cloaked Shadowblades Assassin leaping out and slashing him half a dozen times. “Oooh, they sting like paper cuts! “. But what the Daemon Prince really didn’t see coming was the black poison on the blade that would be his downfall.

Assassins are delicate tools that need careful use and handling. The Aelf Shadowblades assassin are an example of this.  Used correctly they can strike down your opponents warlord and win the game, used with a heavy hand and they will be swept aside without a second thought.

With your assassin you will need to pick your target before the game starts, as you set up your units. This is because you need to pick which unit you are going to add your assassin to. It also helps if you are setting up your units second. Once you have picked your target you can place your assassin in a unit that will get him there. Remember that you do not have to place the model on the table, just mark down which unit he is with so your opponent knows that you don’t change your mind half way through the game.

Notice that if you use the hidden set-up rule that the assassin moves at the rate of the unit he is hiding in, even if this is faster than the 6″ a turn that he usually moves at. So if you place him with a cavalry unit he could move across the table at 12″. When he is revealed he will return to moving at 6″ per turn.