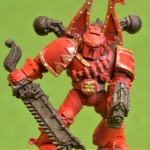 Spread Chaos and Mayhem across the Galaxy!

The new 2012 Codex: Chaos Space Marines has been released, and these pages have been updated to reflect the new codes and the 7th Edition of the Warhammer 40000 Rule Book.

The Chaos Space Marine has a number of options and special rules. With an army this complex it is a good idea to get some over all tactics.

The 7th edition of the Warhammer 40k rules have favoured the Chaos Space Marines. The Maelstrom of War missions are forcing the gun line armies to come out from behind their bunkers and give close combat armies like the Chaos Space Marines a chance. Another strong area that the Chaos Marines can take advantage of is the use of psychic powers.

Across many of the Chaos Space Marine units you will see that you can take different Mark of Chaos upgrades. These upgrades are not prices of equipment, but skills bestowed from the Chaos god that the Chaos Space Marines follow. In many cases you do not have to take a Mark of Chaos. They are totally optional. However they do not come free. Each mark will have a points cost associated with it, and you can only have a maximum of one mark per unit. If you are new to Warhammer 40k then I would suggest that you leave the Mark of Chaos skills for now and revisit them after you have played a few games.

If you are looking to use these upgrades in your army list make sure that you know what benefits the Mark of Chaos give your units and choose a Mark that fits in with your over all game tactics.

Get up close and personal

There is no doubt about it. The Chaos Space Marines are configured to be a close combat army. What you will be looking to do is get in to close combat as quickly as possible. However remember that some of the armies out there are even better at close combat than you are, so having a plan that can adapt will be the best option.

In the following sections you can find tactics for specific Chaos Marine units.