Why do we need a Hero?

In Age of Sigmar games you do not need to have a leader leading your army. However Heroes are the best fighters, have special/magic items that are better at killing your foe, and usually have Command Abilities that are better that the standard Inspiring Presence command ability.

Draconis and Highborn in one article?

Yes, this is a house rule around our way. The different Highborn factions are too small so we treat Highborn and Draconis as the same keyword and interchangeable. After a bit of play testing this seems to work well. If you want to take on the same house rule , great! otherwise ignore any tactics that assume that this is the case.

If you have the Warhammer Fantasy Battles 8th edition box set ( Islands of Blood ), or the Spire of Dawn box set then you will have a lf Prince on Griffon.

The Griffon that the Elf Prince rides makes this a Monster and a hero. However this is an Elfish monster, sleek, elegant, and cuts like a razor. The upside of this is that the Prince on a Griffon is fast. The downside is that they will take damage quickly if they are attacked.

Un-wounded the Prince and Griffon can fly 16″ a turn. This is a huge reach, but beware, this speed means that it is very easy to be caught out in the open without support. However this speed means that you can fly from one part of the table to another, supporting different units in your army or sniping at targets of opportunity. Just think ahead before you make your move!

One last note about movement is that the Griffon has a special rule when it comes to assault, the “Predatory Leap”. This rule allows you to leap 6″ when piling in. This should allow you to strike first in many assaults. Which leads us to…..

All the prince’s weapons are combat weapons. This means that there is little advantage in holding back. He has quite a number of attacks too. 13 attacks per combat round when he is un-wounded. Most of these attacks wound 33.33% of the time, but many have -1 rend! This large number of attacks and minimal rend makes the Prince a good tool for taking on packs or swarms of smaller creatures rather than taking on Monstrous Creatures, even then the Prince will work better with assistance.

The Prince on Griffon makes for a good general. As such he come with an signature Command Ability “Glittering Charge” if you have the Prince as your general, and you use this ability in your command phase then near by Highborn units can re-roll either, or both charge roll dice if they charge before your next command phase. Remember that the Prince is always within 16“ of himself!

If you have the downloaded the first warscroll pdf’s this model was listed as an Aelf Highborn Prince.

The Dragon Noble can be on foot or on horseback.

The Dragon Noble on foot is armed with either a Starblade sword or a Enchanted Polearm.

When mounted on a horse can take a Starlance instead of the Starblade or Polearm. If you are building your Dragon Prince have a think about your playing style before you stick the model together.

The Starlance has a 2″ reach so you will be able to attack the enemy over the top of any front line troops. The Starlance does wound less often (33.33% chance of wounding) but does have the -1 rend and a certain 2 damage.

Placing your Dragon Prince on a horse gives the Prince double speed at 12“ in the moment phase. The horse also gets in to the fight in the combat phase dishing out 2 attacks each with 25% chance of wounding.

As your Dragon Prince on horseback is much faster than your foot troops you will need to be careful that you don’t leave your Prince undefended. If you have other mounted troops you may want to make that unit a bodyguard for the Dragon Prince.

If you use this ability then the selected unit can re-roll failed hits. Remember that you can select the Dragon Prince himself. The best unit to select would be one that you are expecting to do a good deal of shooting or combat attacks. Another way to use this command ability is to choose a war machine where hitting the target delivers a large amount of damage. 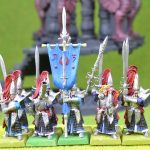 On this page we will look at the Aelf Ellyrian Ravers and the Elllyian Ravers Tactics.

The Ellyrian Ravers are good all round units. They are fast , they have bows for ranged attacks, and they have spears for close assault. The down side is that they are not specialists in any one area. This means that the Ellyian Ravers make better support units rather than core units.

Another use for the Ellyrian Ravers is to dash down the flanks to grab objectives or hit a weak rear area.

The Ellyrian Riders have an array of weapond that allows them to have a more tactical, all round role.

The first weapon to get use to is the Reaver Bow. This gives the Ellyrian Riders a chance to take on units from a distance without getting in to combat. This is useful if the target unit is much bigger and one that will likely kill you off in combat. Think monsters, war machines, and big mobs.

The reaver cavelry bow has a 16″ range. This means that you may just be in charge range of slower units (5″ move plus 12“ charge), but usually you will be safe at full range, if there is table space. Otherwise it would be.wise to keep some obsticals or front line troops between the Ellyrian Riders and heavy hitting enemy units.

The Reaver Bow will wound 25% or 1 in 4 times per shot before saves. This means that you should get 1 wound for every 2 riders if you are within 3″ of the enemy (ie. in close combat). However if you are not in combat each rider can make 3 attacks per shoting round so you can expect 1.5 wounds for 2 riders. Not a great number, but should nudge the ballance of power if used correctly.

The other weapons the Ellyrian Riders have is the Starwood Spear, and the horses attacks. The Starwood Spear is a 2″ melee weapon so you can reach over smaller models and still wound.

Where can I buy Aelf Ellyrian Riders?

Ellyrian Ravers came in the Warhammer Fantasy v8 box set Island of Blood box set so you can pick them up cheaply on eBay. At the moment (Feb 2017) Games Workshop have re-released these models in a box set called Spire of Dawn. This is likly to be a short ‘splash release’, so if you want one, get your order in quick!