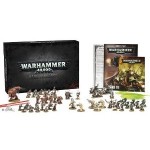 We all know that it is time for Warhammer 40000 to be updated. It has been 3 years since the 7th edition came out and that was a fix release from the 6th edition that came out a year earlier! Don’t get me wrong, the 7th edition of 40k has been very popular. The addition of objectives forced gun-line armies out from their barricades and give assault based armies an even chance. The move away from Standard formation armies to factions and themed armies has added co;our to the game too. However to keep the game fresh the rules need to change and grow from time to time, and basically the time is right! Here is the latest post on the changes due in the next version: Warhammer 40,000 News from AdeptiCon From the post I suspect / expect that Games Workshop will be taking some of the best bits of Age of Sigmar and bringing them back in to Warhammer 40,000. The first on the list was the recognition that the Generals Handbook and the ‘3 ways to play’ have been a great success in Age of Sigmar. I do have to echo this recognition too. The simple free…

Arena Death match is an arena based fantasy miniature game based in the Avatars of War game system. In this game you take control of a small band of mixed race characters. Avatar have created a number of figures with Character sheets that you can purchase separately, or you can use other 28mm figures like the Games Workshop fantasy figures. The rules have been well thought out. If it was not for the forward in the Rulebook I would not have known that this was the first game that this company had produced. I was attracted to this game as I was wanting a D10 dice based game that would act as an aid with teaching simple maths stats. This game fits the bill nicely as it is moderately simple and cheap to start as you only need a few figures each and does not need a large tale area to play on 2 foot square to 3 foot square is ample. It’s also fun to play! You can buy the rule book from Element Games for £17.99 + shipping. They have a number of the Avatars of War figures at very attractive prices too available too. Note that you will…

Other Wargames Although I play the Games Workshop games most often, usually because there are more opponents to play against, there are other excellent wargames available too. In this section we will have a look at Wargames that do not get covered by the other sections. These will usually be smaller niche games and gaming systems.me is waining in popularity. I have also moved the older Warhammer 8th edition pages to this section now that this ga Also see: Warhammer Fantasy Battles 8th Edition The 8th edition of the original Games Workshop fantasy battle game. Also see: Avatars of War – Arena Death Match. This is a fantasy based skirmish game set in a Gladiator style arena.