Just finished stripping, remodelling, and repainting the last core unit to create a new Dark Angel Demi-squad for the Angels of Redemption formation. The last unit I needed was an Assault Squad, but as I did not really want an Assault Squad in this formation I went with a very minimal unit with just 5 men and no Jet-packs or dedicated transport. As a result I have a 80 point unit armed mostly with bolt pistols. I will probably play this unit as a reserves unit, keeping them at the back of the army until I know where the opponent will strike hardest, and then move them forward to bolster that section. As the Angels of Redemption can now be deployed as a demi squad they will get the Dark Angel Demi-squad special rules and fire at BS3 on Overwatch. With a 50% hit rate when my units are assaulted most players think twice before launching assaults! Also see: Space Marine Dark Angel Tactics Also buy: Discount Dark Angel Space Marines from Element Games

Battle Report – Orks vs Dark Angels 7th Edition 40k, with the 2015 Dark Angel Codex. The two armies glared at each other on over the city ruins. The once fabulous city sited at the crossroads of profitable trade routes now lays at the front line of the Ork expansion and the refuge of humanity. Holding this front line The Dark Angels stand alone. Today I had the chance to face my old nemesis Ork Boss Hogan in his bunker where he had created a splendid 6 x 4 city terrain war gaming table. We came with 2k armies and decided to play the Maelstrom of War scenario. The roll off selected the ‘Contact Lost’ Mission. Richard had his newly formed speed freak army with a mighty custom built articulated battle wagon. There was a Mad Max theme running through the whole army and this just was the crowning glory. Also in the Orky line up was a second battle wagon, several wartrukks, a Nob Bike mob, and some buggies. For myself I brought a newly painted Dark Angel army made main from the Dark Vengeance box set painted in pre- heresy colours. To this core force I had added… 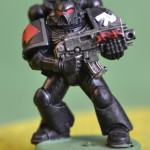 Ok, here we go again! The 2015 release of Codex Dark Angels is out and I will be updating the Wargame Tactics Dark Angels Tactics web pages, starting with the Dark Angels HQ Tactics as these have received the most changes, including the promotion of Azrael from the HQ section to being one of the ‘Lords of War‘. Other changes are that a number of Forations have been added to the codex. The formations are now where youcan find the Deathwin and Ravenwing armies, plus a number of other interesting formations, each with thier own special rules!

The 2015 Dark Angel Codex introduces the new Lords of War category and Azrael has been promoted from the HQ section to be the only Dark Angel Lords of War choice. In the Warhammer 7th edition rules you can see Lords of War referred to on page 119. On page 122 you can see how the Lords of War fit in to the Combined Arms / Battle Forged army list. Azrael, Supreme Grand Master Tactics Azrael is the most senior Dark Angel leader. Because of this he is the most expensive character available, and has the most special rules. Unlike most Chapter Masters Azrael‘s special rules are as much about empowering the unit he is in as it is about giving Azrael more punch. This is quite different from the other Space Marine Chapter Masters and Special characters. Azrael’s Wargear Azrael has some wargear. His Combi-Bolter, Plasma Gun is master crafted so the one shot plasma gun a better chance of hitting and not over heating. Azrael‘s Power Sword is S6 AP3. This means that you should be able to slice through standard Space Marine and Chaos Marine power armour, bur it will bounce off Terminator armour. Azrael has Artificer armour that gives a 2+ save and…

There was one obvious omission from the 2013 Dark Angel Codex and the 2013 Chaos Space Marine Codex, and that was the character called Cypher. Cypher is considered to be one of the most wanted of the fallen Dark Angels that disappeared in to the warp during the fall of Caliban. Since then the whole of the Dark Angel army and their successor chapters have been obsessed with capturing or killing Cypher. The last time we saw any Warhammer 40k rules for Cypher was in the 1999 Chaos Space Marine Codex. However the Games Workshop servitors have been busy and created the ‘Dataslate: Cypher‘ e-book that is available on the Black Library web site and available for most e-readers. The Dataslate e-book is about 200 pages long (depending on the read text size) and covers a good deal of background background on Cypher and the rules needed to play him in a Warhammer 40000 game or a Warhammer Apocalypse game. In addition to the background material and the rules, the Dataslate e-book also contains 6 new battle missions based on Cypher. If you are looking for a compatible ebook reader, I can recommend the Caliber Ebook Reader. It’s so good…

The Ravenwing is the Dark Angel Chapter Bike section. In the 2012 Dark Angel Codex the Ravenwing section has been expanded so that you can field an army that is made purely from Ravenwing units. To Field a Ravenwing army you need to have either Azrael or Sammael heading up your army. If you have either of these characters in your HQ you can field Ravenwing Attack Squadrons as troop choices. Ravenwing General Tactics If you are wanting to play a Ravenwing army you are going to need to be very comfortable with using bikes and landspeeders in Warhammer 40k battles. Bikes have some definite differences to regular Space Marines and you are advised to try out some single player scenarios first to get use to them. You can find the main rules for Bikes on P45 of the Warhammer 40k Rulebook. Some particular differences you will find: Bikes are fast. They move up to 12″ in a normal movement phase, but you can ‘turbo boost’ to move up to 24″ per turn. On a standard 6×4 foot table, that is a big chunk of table per move! Bikes are relentless. This means Bikes can move & still fire their… 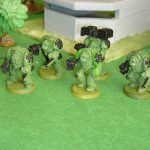