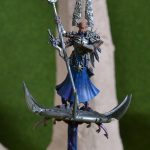 In this post we will have a look at Gaunt Summoner of Tzeentch and how to use him in the Age of Sigmar games.

A Gaunt Summoner of Tzeentch is a figure head character for the Tzeentch Chaos Daemons army. You can find his stats in the Chaos Everchosen section. This is not a named character so it could be reasonable to have several Gaunt Summoners in your army.

Building a Gaunt Summoner of Tzeentch

The Gaunt Summoner is a great figurehead model to lead a Chaos Daemon army. It’s not only a great model but has some useful powers too. However if you try to build the model and then paint it you will find that there are sections that you can see but not reach with a paintbrush. The best option is to build the Gaunt figure and disc separately, paint each section and then glue the two sections together.

How a Gaunt Summoner of Tzeentch Summons Re-enforcements

The main special rule that a Gaunt Summoner has is that they can summon up extra units of Daemons to enter the fight. They can do this in two ways. The first is to use one or two of the spells they can cast in the hero phase, and the other is by been near a Realm Gate in the movement phase.

Summoning units in the hero phase with magic for a Gaunt works exactly the same way as any Daemon Wizard can summon up further units except that the Gaunt gets two spells a turn. So I will cover that option with each unit that can be summoned and concentrate on the Realm Gate special rule here.

The Book of Profane Secretes

On the expedition that there is a Realm Gate in play, the next objective is to get you Gaunt within 9″ of it. This may be a challenge if your opponent knows what you want to do and if the gate is towards the centre of the table like it should be. In this case expect your opponent to throw everything at the gate to stop you bringing in extra forces. Also notice that to bring re enforcements you need to be near the Realm Gate by the start of the movement phases, so a full turn will pass from reaching the Gate and being able to summon support. Expect your opponent to use this interval to remove you from the Realm Gate.

Summoning a monster like the Soul Grinder can really spoil your opponents plans!

Ok, so you managed to get to the Realm Gate and stay there long enough to summon up support; who are you going to summon? Well for starters you can summon any ‘Daemon ‘ unit. This can be any Daemon unit and not just a Tzeentch one. This means that you can summon anything from another Gaunt Summoner to a Soul Grinder! What’s more there’s no upper size on the unit that arrives so units with no upper size on their warscrolls can arrive en mass!

Do remember that you do need to have the models that you want to summon. This means that you may want to think about your army composition when you are looking for new models to add to you army.

Can Summoned Units Assault On Arrival?

Arriving through the Realm Gate counts as the units move phase, so if they arrive within 12″ of an enemy unit they can attempt to charge in the assault phase. The Book of Profane Secrets special rule says that a summoned unit can not arrive closer than 9″ of a enemy unit, so you have a chance to arrive and charge in the same turn.

Please note that the chance of completing a 9″ charge on a roll of 2D6 is small (8 in 36 Chance = 2/9 or 22.22% ). However it is great to get your own back for all the attacks suffered while waiting for the Summoning to work!

Attacking with a Gaunt Summoner of Tzeentch

What the Gaunt Summoner gains in magic it looses in assault. Ok, they are flying on a disc of Tzeentch which gives them 4+ save most of the time, and the ‘Warptongue Blade’ may get a lucky strike against heavenly armoured characters, but I recommend avoiding close combat at all costs!

The Gaunt Summoner has a shooting attack from it’s Changestaff. This has one attack with average chance of hitting and wounding, but at least you get D3 wounds if you do cause wounds. Also as the Changestaff is a 18″ range so you can fire off bolts from behind a bodyguard unit!