In this article we will have a look at tank tactics in Warhammer 40000.

Also while you are thinking about what weapons to add to your tank, have a think about where they are placed too. Some tanks can have the guns forward or further back. As the range of the weapons are measured from the guns themselves I highly recommend placing them as far forward as possible.

As Tanks are big and can block movement and line of sight, how you place your models can make a big difference in the outcome of the battle. 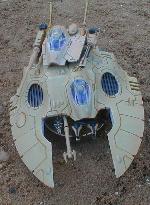 If you are playing tactical objectives tanks and transported troops can race in and grab objectives.

Since version 5 rules of Warhammer 40k, transport vehicles can pick-up and drop off other squads (if they can fit in). They can only carry one squad at a time, but it does mean that by investing points in one transporter, you can increase the effectiveness and value of several squads.