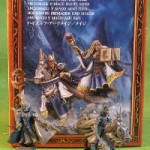 The AoS Aelf are Elves of different heritages.Some are Highborn, some are Woodland folk, and some are more attracted to the darker forces. In Age of Sigmar it is reasonable to play with a mixture of all these Aelf forces in the same army.

The Aelf are sleek and fast warrior that prefer bows and pole-arms when it comes to a fight .

The Aelf do not have heavy artillery like most armies. The best they have is a Repeater Crossbow. I highly recommend having one or two of these in your army to take down larger foe. Otherwise you will need to rely on your wizards. Another option would be to add artillery from one of the other forces of order like human or AoS Duardun ( Dwarf ) armies.

One strength the Aelf army does have is magic. In Age of Sigmar magic is strong and having magic users in your army is highly recommended.

The magic user in a Aelf army is called an ArchMage. ArchMages can be on foot on on a horse. Which one you have will depend on the model you have. If there is not a horse between the ArchMages legs then you have an ArchMage on foot!

Unlike many magic users in the Age of Sigmar game, the ArchMage is more of a defensive character than an aggressive one. Ok he can fire off Arcane Bolts, but the Talisman of Power that he should have, and his signature spell ‘Elemental Shield’ both aid protection. This defensive role is not a weakness, you just need to appreciate the Archmages role in the army. The best way to use his skills will be to keep him back from the front line and use his magic to bolster the forward troops.

The Repeater Bolt Thrower is the only true artillery piece in the Aelf army. As such it has a special place in an Aelf only army. If you are playing an Aelf only army then I would highly recommend taking one or two of these if you can!

The Repeater Bolt Thrower can fire two different types of bolt, the first is a single shot high damage bolt, the second is a batch of smaller bolts that has 6 attacks but less damage each.