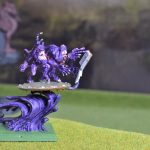 The Blue Scribes of Tzeentch are one of those trick options that you can add to your army that shows that Tzeentch is not only the god of lies and deceit, but is also a prankster!  In this section we will look at how to use Blue Scribes in a Age of Sigmar game and the tactics you can use.

“Oooh”, “arrr!” as the scribes watched the brilliant green firework show emitted from the Orruk Shaman’s eyes “I want that one!” P’tarix shouted with glee as he furiously scribbled on a new page. “Let me have a go!” Xirat’p exclaimed looking over his twins shoulder. All of a sudden another florescent green firework display emitted from Xirat’p fingers catching the Orruk Shaman and a couple of other Orruk units by complete surprise.

The Blue Scribes of Tzeentch is a model with two blue horrors on a disk of Tzeentch. They can fly, they are Daemon Horror Heroes, and they are Wizards.

It is easiest to start with what not to do with Blue Scribes, and that is close combat. Do not get in a fight with these guys if you can help it! What they are good at is magic, and what they are brilliant at is making other wizards in your army much more powerful!

Blue Scribes of Tzeentch are fast! They have a basic 16″ move, and because they fly they can leap over units and obstacles.  Use this to keep your Blue Scribes out of trouble, and in the right place to support your other wizards.

OK, the good stuff! The Blue Scribes are wizards and can cast and dispel as usual. They also have a neat signature spell that I will go through later. However that is not the really trickery part of this models abilities ( yes really!). It best feature of the Blue Scribes is that they can learn spells from the Wizards around them! And YES that is FRIEND OR FOE!  These guys vacuum up spells like I don’t know what, working really really hard!

Each time a Wizard successfully casts a spell ( ie rolls high enough) within 18″ of the Scribes, you get to roll a dice. On a 4+ the Blue Scribes learn that spell and can use it in their Hero Phase for the rest of the battle. As you are within 18″ you can then attempt to dispel the opponents spell.

Remember that the Blue Scribe can only cast one spell per Hero phase. This ability just means that you have a wider choice of spells to choose from.

OK, if you think that the Frantic Scribbling was Chaos enough, the Blue Scribes have another trick up their sleeves. This ability allows the to cast one spell per game on a 2+ regardless of the spell difficulty. In addition to this, this casting can only be dispelled on a roll of 9+ on 2D6 ( plus any dispel bonus ).

As this spell is almost certain to go off, use it for something big. Like summoning a Soul Grinder (difficulty 10), and if you are doing something big you may as well do it early in the battle too!

Where can I buy Blue Scribes of Tzeentch?