In this section we will look at the Tyranid Fast Attack choices and the Fast Attack tactics.

The Tyranid army is largely a close combat army. This means that you want to get to grips with the enemy troops as fast as possible!

Getting to the enemy fast can be achieved in different ways. You can start close up by infiltration, or deep striking, or you can move fast either by wings, or as beasts. The best option is to do both!

Fast Attack can rarely hold objectives. This means that they are much more useful harassing the enemy that trying to hold some strategic location. You have better options to hold strategic locations and these are usually your ‘ Lurk ‘ Tyranids ( Termagants, Gargoyles, & etc).

How to add wings to Warriors to make Shrike Broods

Forge World have Tyranid Shrike models these days, however with a little work you can create your own wings by adding two paper clip rods too a scything talon arm and then add a thin layer of green stuff over them to create the wing.

Once the Green stuff becomes a bit more firm you can sculpt the wing to a better shape and add in etchings to add more detail.

Tyranid Raveners are one of the Tyranid fast attack options that are doing well using the 7th edition Warhammer 40000 Rules. The main reasons for this are that they can Deep Strike on the game table ( Tunnelling ) and they are beasts so they can move 12″ in the movement phase, plus some other advantages.

Raveners come in a variety of weapon configurations, but mainly fall in to 2 groups, those with shooting weapons and those with just close assault weapons. If the Raveners are armed with shooting weapons then they are much more able to offer close support for other assaulting units. Raveners with just close combat weaponry are best off just getting stuck in to close assault as soon as possible as often as possible.

Raveners and the Hive Mind

Raveners are not Hive Mind creatures so they do appreciate having a Hive Mind creature around to keep them under control. However as their instinctive behavior is Feed, this is not vital. If you do want to give them Hive Mind support, the tunneling Trygon Prime is an excellent option.

If a Ravener does fail its instinctive behaviour test then they are subject to the Feed special rule. This means that half the time that they fail the Instinctive Behaviour tests they will turn on each other causing wounds to themselves. The other 50% of the time they will not run, but must assault if they can. This is not too bad if they are in assault range, otherwise you only have the movement phase to do something useful.

What is the best way to Deep Strike Raveners?

As I mentioned above, Raveners can Deep Strike (Tunnel) in to the battlefield. This is a great way of getting them in to the action quickly, and another way to overwhelm the enemy with choices as your other troops get up the battle field.

What Raveners are specially good at are ripping open tanks that are Armour 10 on the rear armour. They are S4, so you do need 6’s to do glancing hits. However with two sets of Scything Talons by default and 4 basic attacks each ( 5 attacks on the charge ) you should to do 3+ glancing hits per turn. This means that when you are selecting a Deep Strike landing point, it’s wise to choose somewhere safe, but within striking distance of the enemy armour.

If there are no armoured targets, or the armoured targets are too fast to catch, like Eldar and Dark Eldar, then head for the enemy troops. The Raveners are more than a match for most ground troops.

Winged Tyranid Rippers are called Tyranid Sky Slasher Swarms and can be very effective. Their independence from the Hive Mind, Speed and survivability mean that you can send them on sub-missions tying up Heavy Weapon Squads etc. Highly recommended.

Games Workshop have not released a Tyranid Sky Slasher model. However you can find some at Forge World, or use an alternative. In this image you can see that I have used the Necromunda Rippper Jack models.

The Tyranid Gargoyles are Tyranid Termagants with wings. This means they are fairly cheap shock troops. Armed with a Fleshborer they also get a ‘Blinding Venom’ biomorph upgrade. This gives the Gargoyle a single poisoned (6+) Blinding attack instead of the Gargoyle’s regular attacks.  For an upgrade cost of 2 points over the Termagant, the Gargoyles are good value for the points.The

The Tyranid Gargoyles can be upgraded further by adding Adrenal Glands and Toxin Sacs. However these are close combat upgrades, and for the most part Tyranid Gargoyles are better at close support fire and hit and run roles. For this reason I would not recommend these additional Biomorph upgrades.

Gargoyles and the Hive Mind

Gargoyles are Ld6. This means that if they are left on their own they will fail their Instinctive Behaviour test over half of the time ( 15 in 36 chances to pass or 41.667% ) This means that is very risky to run Gargoyles without Hive Mind Support. Winged Hive Tyrants, Winged Warriors ( Shrike ), the tunnelling Trygon Prime are good options to provide mobile or forward Hive Mind support for the fast Gargoyles.

Tyranid Harpies and the Hive Mind

If the Tyranid Harpy does fail an Instinctive Behaviour test then it will go on the hunt with the Fearless option. On the whole this is not a problem. Itjust means that the Harpie will do it’s own thing for a turn. Just get ready to take the reins again next turn.

The Tyranid Harpie comes with the Stranglethorne Cannon, Spore Mine Cysts and Scything Talons. This means that the Harpie can work as an air to ground attack platform or as a close assault Monstrous Creature. One the whole the Harpie work best airborne taking pot shots at massed hords of enemy ( Imperial Guard, Orks, Other Tyranids etc.).

The Hive Crone is a new addition to the 2014 Tyranid codex. It is billed as an anti-aircraft flying monstrous creature with 4 air to air missiles fitted as standard. However air combat is not it’s only role as the Hive Crone has a couple of air to ground attack weapons too. And if this is not enough as a Monstrous Creature the Hive Crone can dish out some hurt in close combat too.

One aspect of the Crone to be aware of is that like the Harpy the Hive Crone is T5. This means that it can be instantly killed by S10 weapons. The main defence to this will be to keep in the air where blast weapons can not reach you and most other weapons need to hit on 6’s. 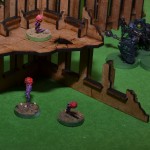 Tyranid Spore Mines can be deployed in a few different methods.  The first is by dropping them in using the Deep Strike reserve rules, the 2nd option is the Biovore Barrage cannon, then there is the Harpy that can drop Spore Mines as bombs and now there is the Sporocyst that deep strikes and then poops out Spore Mines each turn.

If you fire Spore Mines from a Barrage weapon then you need to pick a valid target and if you hit then the Spore Mine blasts are worked out just like any other S4 Barrage. You do not get any Strength bonus for having 2+ Spore Mines.

In the 2013 Tyranid Codex you have more control over the Spore Mines. However the Spore Mines only move slowly. This means that you will want to move the Spore Mines in to strategic locations where the enemy want to go before they get there. Sitting on top of Strategic markers in ruins or woodland springs to mind.

The more Spore Mines you have in a cluster the stronger the blast will be when the detonate. This starts at S4 for a single Spore Mine and increases +1S for each additional mine. It also follows that if you opponent picks off a couple of Spore Mines before you get in to assault, then they will reduce the damage that you will cause later.

Exploding Spore Mines harm both friend and foe. This means that it is unwise to have your Spore Mines pile in to an existing Assault, unless you feel that the possible loss of you troops is worth the sacrifice.

placed correctly the Spore Mines can act as a good counter Assault shield. What you do is to form the Spore Mines in to a Congo line 2″ apart along the flanks of your advancing broods. This protects the flanks from any flanking or deep striking units.

The Weekly White Dwarf issue 41 introduced the Tyranid Mucolid Spore Mine Clusters. These are Monstrous sized Spore Mines that can Deep Strike or be pooped out of Sporocysts.

The extra size of the Tyranid Mucolid translates in to a bigger bang when the Mucolid contacts the enemy. Specifically the Mucolid explodes with a S8 large blast marker if there is a single Mucolid that increases +1S for each additional Mucolid. You can have up to 3 Mucolid Spore to a cluster if you are deep-striking, so this can become a S10 blast!

Another bonus is that Mucolid Spores can hit zooming flyers and swooping Monstrous Creatures. This means that you can deploy them as Barrage Balloons

The downside of the Mucolid is that it only move 3″ basic move per turn with run and charge distance of D3″. This means that the Mucolid may become a sitting duck, but what do you expect for 15 points? One option is to make use of the Mucolid’s Shrouded special rule and head for cover until a suitable target come it’s way.

Where Can I Get Mucolid Spore Mine Clusters

The Mucolid Spore Mine can be found on the sprue of the Tyranid Sporocyst model.. You may find these sprue parts on eBay or have a go making your own!