Games Workshop’s newest rule expansion for the Warhammer 40k game is Planetstrike. It is aimed at players who have played plenty of basic games and want to try something different. You do not need Planetstrike to play the basic game, but it does look like it will be a interesting addition.

ps. If you ever have to plan a invasion it is best to land where there is no opposition, assaulting dig in fortification tends to need 10 attacking troops to every 1 defending solder (see D-day landings in WWII )

The idea behind Planetstrike is to represent the invasion (re-claiming?) of a planet by one army that is being held by another. The holding force knows that the attack is coming and has had time to lay down defences.

The force organisation charts for attacker and defender are quite different from each other, and quite different from the standard force organization chart. Because of this I highly recommend that you have two army lists written out in advance. This may mean that you will need to take two armies with you if you travel to your games, but if you are crafty you may be able to consolidate the two army lists so you do not have to carry as many models.

The first thing that you have to realise as a defender is that the enemy can come in from any edge, or even deep strike in to the middle of the table. The second thing to be aware of is that many armies will have troops that can assault on the first turn they appear.

In Planetstrike, the defenders has to have one HQ and two troops choices as a minimum, but you can have up to three HQ, eight troop choices, and up to six heavy support choices. Elite and Fast attack remain normal.

As the defender you have the opportunity to set up the table terrain as you want. You do not know where the attack is coming from yet, so be prepared to be attacked from any edge. The centre of the board is usually best.

When you have finished setting up the terrain, the attacker will choose which board edge he wants to come on from.

Think carefully about what troops you want to keep in reserve. Troops that are set up at the start are in danger of being destroyed by the preliminary bombardment ‘Firestorm’. Also reserves give you a chance to counter attack.

The Firestorm attacks can decimate your army, so you need some method of protecting them through this phase of the game. This is because the Firestorm strikes use the same strength and AP as a Battle Cannon, and that you do not get line of sight cover from shots that come directly down. Remember than any squads taking a wound will have to take a pinning test too!

One method is to use the ‘Trench Network’ stratagem. This gives your troops a 5+ cover save, so you can expect to loose 2/3rds of your troops, more if you don’t roll well! You could opt to go to ground. This would mean that you only loose 50% of your force, but you can not shoot in your turn (useless). The second method is to keep as much of your force in reserve. The danger of this is that they will turn up in a ‘piece-meal’ fashion. The next option is to protect your forces by hiding them in bunkers, tough tanks, or in 2+ armour.

Troops coming in from reserves 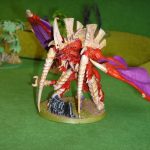 The defenders reserve troops can come in from a board edge or as deep strike troops. You have to roll to see which units come in each turn, but they use the modified reserve table in the Planetstrike rules, so they can turn up on the first turn.

Note Be aware that you do not get the ‘Deepstrike troops can assault on the same turn as arriving’ rule, or the ‘anything without wheels can deep strike’ rule that the attackers get. Also be aware that the defenders reserve troops arrive on a random board edge, so you might want to give troops transport just in case they arrive on the ‘wrong’ side of the table.

In Planetstrike the attackers have plenty of tools to help. The main one is that you can get in to assault very quickly.