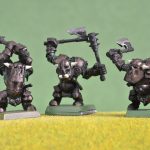 Ardboys are bigger tougher Orc that instead of leading their own mobs. These Ardboys mobs are usually hard enough to deal with any opposing elite units.

If you wondered where the 8th edition Black Orcs went in Age of Sigmar, well you have found them!

You may notice that Ardboys move an inch a turn less than Orruk Boys. This should mean that the Orruk boys get in to combat first. This is good. It means that the Orruk boys will act as a natural shield holding back the enemy rank and file troops while your Ardboys seek out bigger targets.

Orruk Ardboys have 2 wounds an extra point of bravery and a 4+ save from the extra armour the Ardboys wear.

Orruk Ardboys get a wider weapon choice than the first Black Orc warscroll offered. If you have not built your models yet have a look at the different 3weapon choices and think about how they match your style of play. None of the weapon options are massively better than another. Also have a think about having a unit that has a mixed bag of weapons. Having a unit with different weapons will give you more tactical options (more flexibility in what the unit can do during the game ) but less able to be a specialist unit for specific situations.

Orruk Ardboys with one choppa and a shield loose some hitty damage in favour of an extra 1 in 6 chance of saving a regular damage. The Ardboys have 2 attacks that hit on 4 and wound on 3’s which means 2/3 chance of wounding per turn per Ardboy.

Orruk Ardboys with dual choppas or smashas get an extra attack for each combat round. That means they have 2 attacks that hit on 4 and wound on 3’s which means 3/3 chance of wounding, or once per turn per Ardboy. These wounds have no rend so they may bounce off any armour that the target has! You want to use this weapon if you are facing large numbers of weaker targets.

The third option is to arm your Ardoy with one big chappa or Shasha. this gives you 2 attacks like the single choppa, but adds a +1 rend. So you get 2/3 wounds per combat phase per Ardboy, but target models with 6+ save don’t get a save at all, and all others have a greater chance of failing their saves.

The Big Choppa / Smasha was the only type of weapon the Black Orcs had. even though they could be modelled with ant of the three weapon types.