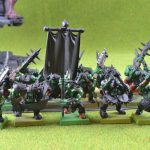 A mob of boys gathered around.

Orc Boyz are the rank and file troop unit for a Orruk army.  Orc Boyz come armed with a choppa (hatchet) and shield, two choppas, or a ‘Pigstikka’  spear and shield. If you have the old Orruk page with out the graphics, update your app. The new page also allows Orruk Arrer Boyz in the same unit.

Orc Boyz are rough and tough, but with a quite average bravery score. To improve on this keep them in larger groups so that they will benefit from the +1 bravery every 10 models in a unit rule found in the main rules. Mobs of 20 to 40 are common.

The main weapon of the Orc Boyz is the Choppa. This is a basic weapon so you only get one attack per Orc, you do get a +1 rend per hit though. If you arm your Orc Boyz with 2 choppas then you can re-roll 1’s to hit. Orcs normally hit on 4+. The re-rolls move the chance of hitting from 50% to 58.333%. This may not look much on paper, but it is very satisfying when you stick in a couple of extra wounds.

Grubba saw some of the younger Orruks grab Pigstikkas and shields. They won’t get a chance to get their hands on the pointy ears, but they will be looking for a chance of some action from the back

The next most popular weapon is the spear ‘Pigstikka’. This gives the Orruk a 2″ reach. This means that Urruks on the second or third rank (depending on the size of the bases) can reach over the Orruks on the front rank for some extra killiness. The downside of the Pigstikkas is that they do not get a rend, but that’s it. For larger units I recommend having a mix of choppa’s and Pigstikkas.

The last option for the Orruk Boyz is the Bow. Orruks with Bows use to be in a separate unit called Arrer Boys. Now that they are listed on the same warscroll you can mix and match units with choppas and arrer boys. However the fact that you can mix and match doesn’t mean that you should. Arrer boyz work best as stationary units. You get +1 to hit if the Boyz are stationary that turn, and are 3″+ away from the enemy. This goes right against the Orc, change in first and think about the consequences if you live long enough, attitude. In short keep the Arrer boys as a separate unit unless you have a good reason not to.

Arrer Boyz get a short Cutta knife. Nothing much to get exited about here. It just gives the Arrer Boyz some close combat ability.

Orruk Boyz have a number of simple special rules and abilities that make them more like Orcs! To really buff up the units you will need to use them in coordination with Warbosses and other special characters.

You can have any number of standard bearers inn a unit of Orukk Boys. these standards can be either Orruk Banners or Skull Icons. There are no benefits If you have two of the same standard ( other than if one dies you still have another one), but you can benefit from having one of each standard bearer in your unit.

One way to improve the leadership score is to have a Orc Banner. This will give the unit +2 to bravery when a enemy unit is within 3″. This means that when you are in close combat or about to change in, you will benefit from the bonus. However you don’t get any benefit if you are stuck in the middle of nowhere and being shot at. The moral of this story is to get your Orruk Boyz stuck in!

This is normally the skull of some beast or for that the unit have killed ion the past placed on a pole to show how hard they are. In game turns in allows you to roll a D6 for each fleeing model and on a 6 the model stays. This is OK, but if I have to choose between this standard and the Orruk Banner, I would go for the banner every time!

Orruks are more brazen when then are in larger mobs. In game terms the Orruks hit on 3+ with melee weapons if there are 20+ models left in the unit. This applies to melee weapons only, so no benefit here for Arrer boys shooting their bows. Arrer boys could benefit from this rule using their Cuttas which they didn’t get when they where on  a separate warscroll.

Here is one for the rule lawyers out there. In the warscroll it says that “You can re-roll save rolls for a unit with Waaagh Shields in the combat phase” how I read this is that if there is a single model with a shield then the whole unit gets to re-roll saves. I suspect though that it should just be the models with shields that get the saves. I will leave this one for you to decide!