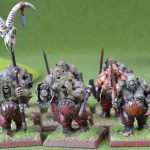 Ogor Gutbusters are not subtle. Coming from the frozen waste lands where only the biggest and toughest survive, Ogors Gutbusters come to grab supplies and smash and bash anything and everything that gets in their way!

If you like to fight battles with monster creatures that win battles using brute force, then an Ogor Gutbusters army could be your thing!

Games Workshop have stopped selling many of these units, but they may be available through eBay.

In 8th edition Warhammer Fantasy the Gutbusters where the Ogor Kingdom army.

From a gamers point of view one great advantage of building a Ogor army is that you do not need many models to make a good sized force. It only takes 3 models to make a unit. Sure a unit of 12 works better, but compared to a unit of 30+ Orruks, that is still much easier to collect, carry and paint!

Butchers are the wizards of the Ogor army. However that is not to say that Butchers are useless in a fight. Far from it! The Butchers are only slightly behind the

In the Age of Sigmar Destruction Gutbuster Ogors army, Ogors Brutes are the rank and file units. They have no ranged weapons so you will want them to get stuck in to combat as soon as possible.

Ogre Brutes have 3 attacks and a 33% of wounding before saves. This means that you should expect one wound per Ogor model. However the winds of fate will mean that this will vary, but the more Ogors you have in a fight, the more the averages will even out!

Ogor Brutes have 4 wounds and a 5+ save. This means that they are not invulnerable, but they should take a battering before they are laid low!
Ogor Weapons

If you take the iron fist option then you do not gain any advantages during your melee round, bur you do get to hit back if you save with a roll of 6+. Remember that you may save bonuses that will help your save roll, these are added to the final dice rolls first.

If the regular Ogors are not brutish enough, then meet the Ogor Ironguts! These are Ogors with heaver armour and double handed weapons!

Iron Guts wear basic armour and get a 4+ save because of it. That’s 50% of regular wounds saved. Adding this save to the usual 4 wounds that Ogors get and you start to see what makes this unit so tough! 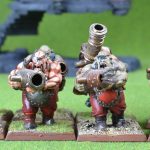 Leadbelchers are Ogors that have picked up a cannon from some where, loaded it with gunpowder and scrap metal and now use it as an oversized blunderbuss!

Like many of the other Ogor units there you only need a minimum of Leadbelchers in a unit. The unit does not get any special rules for being larger than this, so keeping to smaller sized units may be a good strategy!

The main feature of the Leadbelcher unit is the Leadbelcher Guns that they carry. In true Ogor fashion, these guns have no finesse! The closeted weapon that I can think of is a Blunderbuss. They have a short 12″ range, and a random number of attacks.

The Leadbelcher Gun can be used in 3 ways. The first is as a melee weapon, hitting the opponent with is like a club. Do not under estimate the effectiveness of this weapon on close combat. It has 2 attacks per model, each attack with a 33.33% chance (2 in 3 chance of wounding per model) of wounding, with -1 rend and 2 wounds! Basically these weapons can make a mess of most units!

The second is a close ranged move and fire weapon where you can fire the Leadbelcher Gun even if you have moved or you are in combat. Fired this way you get D3 attacks, each with a 33.33% chance of wounding with -1 rend and 1 wound. This means that they are less effective as a ballistic weapon (49.99% chance of wounding) then they are and close combat clubs (66.66% chance of wounding) ! Don’t give up hope though, because you have to remember that you can shoot in the combat phase too, so the chance of wounding is not either /or but the sum of the two chances to wound!

So how do you get to shoot at close range without moving? The usual best tactic is to get the enemy to come to you, preferably slowly and in small numbers at a time! This means holding an objective that they want, funnelled through a tight space and over difficult ground. The chance that you will be able to set this up each game will be slim, however the closer you get to this ideal the better!